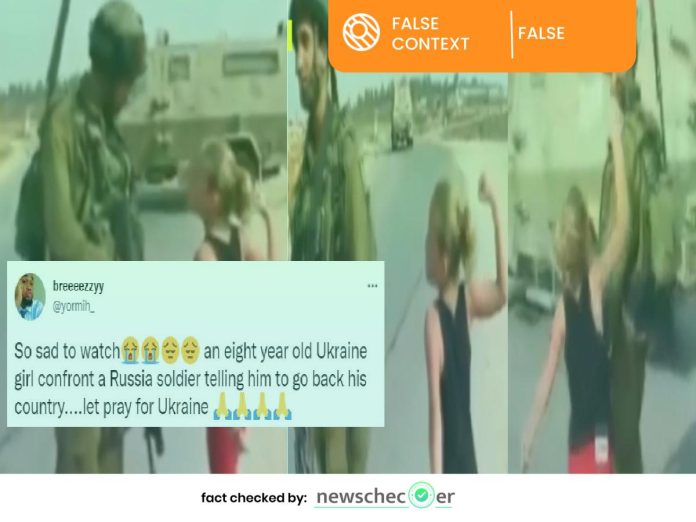 A video of a young girl confronting an armed soldier is doing the rounds on social media amid the ongoing Russia-Ukraine conflict. The video shows the girl shouting at the soldier and repeatedly threatening to punch him. It is claimed that the video shows an eight-year-old Ukrainian girl taking on a Russian soldier for her country. Newschecker has found the video to be ten years old.

A Twitter caption with the video reads, “So sad to watch, an eight year old Ukraine girl confront a Russia soldier telling him to go back his country….let pray for Ukraine”. The video is viral on Twitter and Facebook with similar claims.

TV channel Republic Bharat also aired the same video claiming to be of a Ukrainian girl confronting a member of a Russian troop.

The ongoing clash between Russia and Ukraine entered its fifth day on Monday. As per Ukraine’s Ministry of Interior, at least 352 civilians including children have been killed and hundreds injured in the country following Russia’s invasion. Ukraine maintains that it won’t surrender and has urged civilians to take up arms and defend their country

With the help of In-Vid, a reverse search led us to a report of The Times of Israel carrying a frame of the viral video.

The article, published on January 1, 2018, says that the girl’s name is Ahed Tamimi- a Palestinian – who gained fame in 2012 when she confronted an Israeli soldier.

The Israeli soldier had arrested Tamimi’s brother on which she reacted aggressively and threatened to punch the personnel. The incident has been reported multiple times by media organisations.

A BBC reports states that at the time of the incident, Tamimi was 11 years old. In 2018, Tamimi and her mother were indicted by a military court on the charges of slapping and shoving Israeli soldiers in their village in West Bank. She was released later in July 2018.

The viral video has no relation with the ongoing Russia-Ukraine crisis. The video is almost 10 years old and the young girl seen in the video is Palestinian and not Ukrainian.

Report of The Times Of Israel

Arjun Deodia
An Electronics & Communication engineer by training, Arjun switched to journalism to follow his passion. After completing a diploma in Broadcast Journalism at the India Today Media Institute, he has been debunking mis/disinformation for over three years. His areas of interest are politics and social media. Before joining Newschecker, he was working with the India Today Fact Check team.
Facebook
Twitter
WhatsApp
Linkedin
Previous article
Viral Image Of Children ‘Paying Their Respect’ To Troops Is OLD. Not Connected To The Ongoing Russian-Ukrainian Conflict
Next article
Old Photos Of Women Ukrainian Soldiers Shared As New