Amid the scare of the novel coronavirus, a graphic is doing rounds on social media claiming that star footballer Cristiano Ronaldo has transformed his hotels into hospitals to help people affected with COVID-19. We found that several users on social media shared the same viral graphic on their respective handles. We also found that several media outlets including Dainik Bhaskar , India Today and The Hindu Business line published the report attributing it to the Spanish newspaper ‘Marca.’ 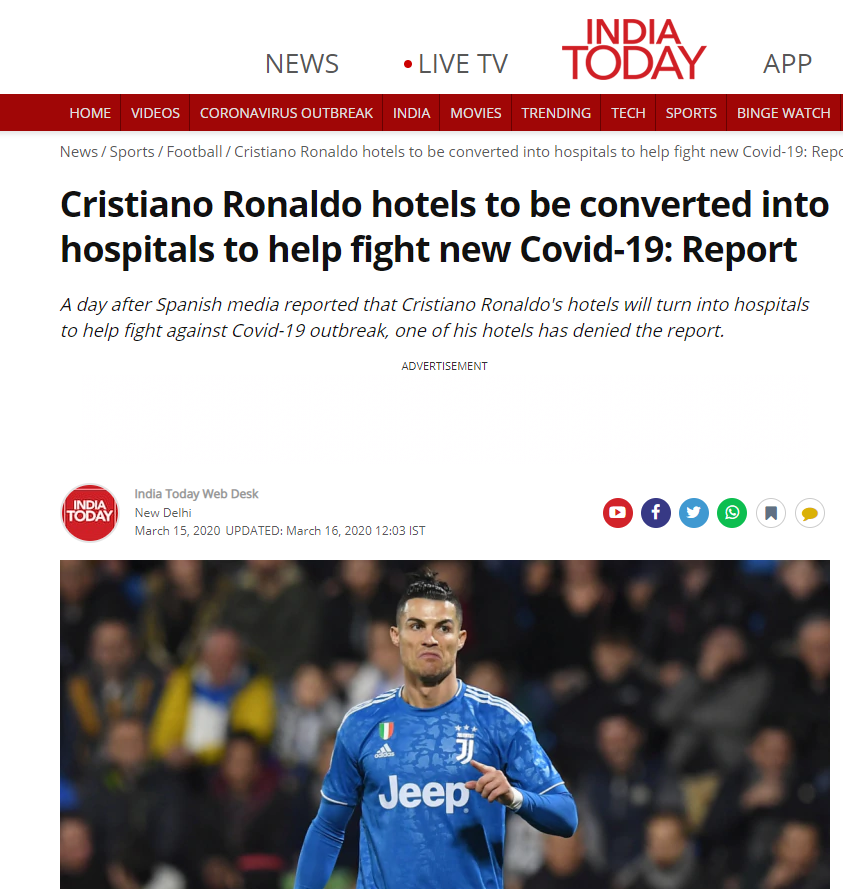 As we began fact checking the claim, we found that several journalists including Kristof Terreur, correspondent at Dutch newspaper Het Laatste Nieuws and Filipe Caetano, foreign affairs editor at Portugal based channel TVI rubbished the claims made by several media outlets.

Reported as fake in Portugal, in the meantime deleted by Marca (who made it a viral story). https://t.co/Iq7QAkDImD

With the help of relevant keywords search, we found a report of Dutch TV news channel RTL Nieuws who interviewed the spokesperson of Cristiano Ronaldo’s hotel in Lisbon. According to the report, the spokesperson denied the claim that the hotel was going to be transformed into a hospital. During our search, we found a statement issued by a Facebook page called Arena Desportiva, which mentioned that they have taken down their post. They said,” the news of the hotel being turned into hospitals has also been deleted from our Facebook page as this news was false”.We received a message from our source named Paula Carvalho, who said that she was midled by other people, and we immediately removed the information from the page” they further said.

It is evident from our fact check that media reports claiming Cristiano Ronaldo transforming his hotels into hospitals to help the coronavirus patients is false.