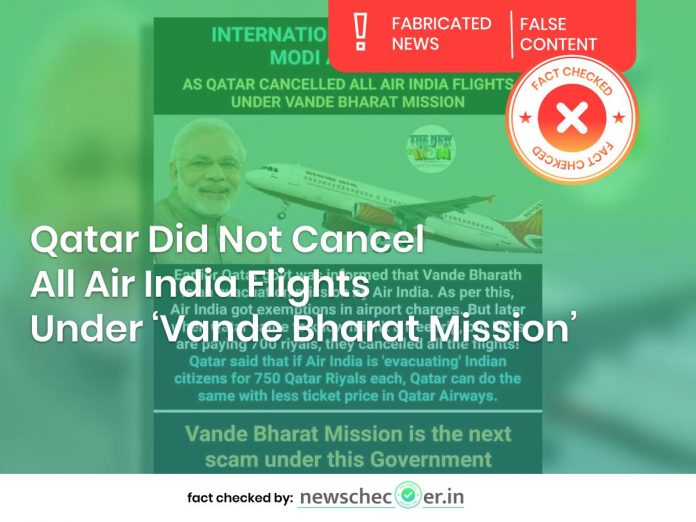 An image we received on our Whatsapp verification number claims “Qatar cancelled all Air India Flights Under Vande Bharat Mission.” See the image below.

The above image also claims that earlier Air India got exemptions from their airport charges on account of Vande Bharat being an evacuation mission. Later, on realising that passengers paid 700 riyals for these tickets, they cancelled all the flights.

You can view another example here.

Through a keyword search we came across a clarification on the official Twitter page of the Embassy of India Doha, Qatar. It denied the rumour by stating that a flight was cancelled due to technical reasons. And is being rescheduled for 12 May.

A subsequent tweet on 11 May by the Embassy of India, Doha expressed that a few media channels were making a baseless claim about flight IX-374 from Doha to Thiruvananthapuram was cancelled because of differences over landing and handling charges. None of it is true.

We found the claim in the image which states that Qatar cancelled all Air India flights under Vande Bharat Mission to be false.

Nikita Vashisth
Facebook
Twitter
WhatsApp
Linkedin
Previous article
A message claiming four common treatments recommended by doctors at Nanavati Hospital is Fake
Next article
There Are No Massive Fires In Uttarakhand, Old and Unrelated Images Are Being Shared