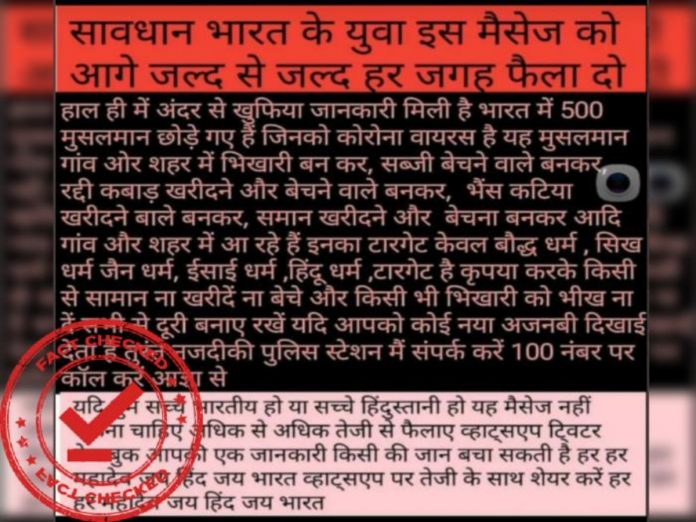 As many as 500 Muslims, infected with COVID-19, are roaming in villages and cities with a planned conspiracy to spread Coronavirus.

Amidst the rise in the number of cases of novel coronavirus, there is a surge in communally divisive messages on social media. In the wake of the spike in COVID-19 cases linked to Tablighi Jamaat gathering in Delhi, a WhatsApp image is viral on social media, which claims that as many as 500 Muslims, infected with COVID-19, are roaming in villages and cities with a planned conspiracy of spreading Coronavirus.

The message circulating in Hindi reads, “Received an Intelligence input that as many as 500 Muslims, infected with COVID-19 and disguised as beggars and vegetable sellers are roaming in villages and cities with a planned conspiracy to spread Coronavirus and their main target is Sikh, Hindu, Buddhist and Jain community. Please do not buy anything from them and distance yourself from such people. In case you see any stranger Call 100 and inform your nearest police station. Kindly forward this message to everyone and save lives.

The message seems to be widely shared on WhatsApp. However, we were able to locate a few on Facebook and Twitter as well.

Newschecker received the same viral message on its helpline from a user asking about the message veracity.

At first glance, it was clear that the viral message doing rounds on social media is an attempt to instigate communal tensions between communities.

As we began fact-checking the claim, we looked for any media reports claiming the same. However, we did not find any information to corroborate the same.

During our search, we came across the official Twitter handle of the Government of Punjab, which posted a Tweet regarding a viral message about a specific religion and sect. The Tweet reads, “Some persons are spreading malicious rumors about specific religions & sects spreading the virus. The Punjab government appeals to the people to report any such message to Punjab Police immediately and refrain from sharing it with others. However, we were not able to verify whether they were talking about the same viral claim or some other.

To verify the viral claim, we contacted the official Twitter handle of Punjab Police. We posted the Tweet, asking Punjab Police to clarify. Responding to our query, Punjab Police said,”thee image sent by you is a Fake News and has been sent to the special team dealing with Fake News”.

It is evident from our fact check that the message viral on social media claiming that as many as 500 Muslims, infected with COVID-19, are roaming in villages and cities is false.

Shaminder Singh
Shaminder started off his career as a freelance journalist for a consulting and research firm. He has been a Political Strategist and Media Manager. Before joining Newschecker, he worked with various reputed media agencies like Daily Post India, PTC News.
Facebook
Twitter
WhatsApp
Linkedin
Previous articleThe Disaster Management Act Does Not Restrict Citizens To Share Messages On COVID-19
Next articleHumpback Whales Spotted Near Bombay High? No, Here’s the reality