Candian PM’s wife is infected with coronavirus, did you see this video message from her?

A video is doing the rounds in already flooded WhatsApp groups. It is being claimed that the lady shown in the video is the wife of Canada’s PM Justin Trudeau. In the viral video, a lady can be seen describing her improved condition because of medication and also warns to not take chances. If you watch the video, it doesn’t give you a reason to raise your eyebrow, what smells fishy here is the text message that has gone viral along with the video. The text message reads, “Have you watched this video of Canadian PM’s wife?”

Now, as we all know, the world is fighting an infodemic in the form of a pandemic and amid such a crisis, the impact one such video can have on common people is just a glimpse of how vulnerable human-lives have become because of an infodemic.

When we began our fact-checking process, we found that the viral video has made it to social media platforms along with WhatsApp groups.

The intensity of this claim on Facebook can be viewed here.

The intensity of this claim on Twitter can be viewed here.

We tried to know more about the Canadian PM’s wife. As per this Wikipedia article, her name is Sophie Grégoire Trudeau and is a former television host. And she is involved in charity work and public speaking, focusing mainly on women’s and children’s issues.

Sophie Grégoire ( French: [sɔfi ɡʁeɡwɑʁ]; born April 24, 1975), also known as Sophie Grégoire Trudeau, is the wife of the 23rd prime minister of Canada, Justin Trudeau. She is a former television host and is involved in charity work and public speaking, focusing mainly on women’s and children’s issues.

While we were collecting more information about Sophie Grégoire Trudeau, we also found a BBC article which informs that she has been tested positive for novel coronavirus.

Sophie Grégoire Trudeau, wife of Canadian PM Justin Trudeau, has tested positive for coronavirus after returning from a trip to London, a statement from the PM’s office says. “She will remain in isolation for the time being. She is feeling well, is taking all the recommended precautions and her symptoms remain mild,” it read.

‘Like having glass in your lungs’: Mom describes having coronavirus

A British mom suffering from COVID-19 in intensive care described the deadly virus as like having “glass in your lungs” – as she urged others not to take any chances amid the pandemic.

An excerpt from the aforementioned article reads, “Tara Jane Langston, 39, a waitress, was initially diagnosed with a chest infection — but her condition worsened until she was rushed to west London’s Hillingdon Hospital, where she has been for about a week, according to Metro UK. In a WhatsApp video, she shared with colleagues — which has since circulated on Facebook and gone viral — she is shown in her hospital bed hooked up to various breathing tubes.” 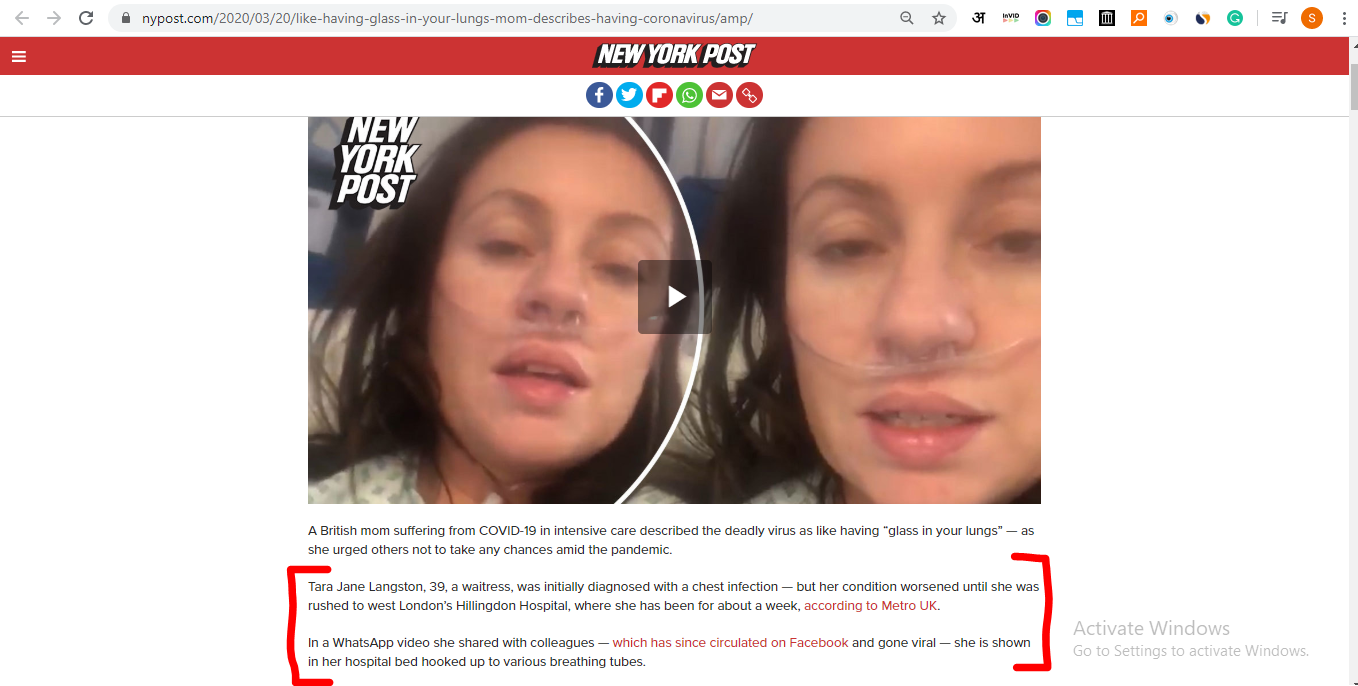 We observed that the New York Post carried the aforementioned article on the basis of information published by a British daily Metro.co.uk. The article carried by Metro UK has described the whole issue in detail. As per an excerpt from the Metro UK article, “Tara Jane Langston, 39, had initially been diagnosed with a chest infection, before her condition worsened and she was rushed to Hillingdon Hospital, in west London, where she spent last week. She had been taking around eight ibuprofen tablets a day, which she says medics think could have exacerbated her symptoms. The NHS advises anyone with coronavirus to take paracetamol, but says there is currently ‘no strong evidence’ that ibuprofen will make the infection worse.”

Tara Jane Langston, 39, was admitted to intensive care with coronavirus and warned colleagues not to take ‘any chances’ with the virus.

As we searched further, we also found a YouTube video by Guardian News which backs the articles carried by Metro UK and New York Post.

As we searched further, we found the Facebook Profile of Tara Jane Langston where her friends have wished her a speedy recovery. We also found a post on her timeline where it is claimed that the video was posted by Tara’s sister Nicole Poppy Keatley.

We then searched for the post where this video was posted by Tara’s sister. The Description of the post reads, “My sister is in her 30’s & normal health she contracted CV-19 and has been in intensive care for a while now. Please please please be careful & follow all guidelines & health measures. Just because the news is highlighting the elderly & people with underlying health issues as being a high risk that doesn’t mean if/ when you catch this your body will be able to handle/ fight it easily. Taras had BIG issues breathing & with the help of the hospital & NHS she’s back talking & can share her experience. Love you 600 Tara Jane Langston you’re so strong & doing amazing we miss you so much can’t wait to annoy you again after all this is over.”

It is evident from our fact check above that the lady in the viral video is not Canadian PM Justin Trudeau’s wife Sophie Grégoire Trudeau but a British national namely Tara Jane Langston.

Saurabh Pandey
A self-taught social media maverick, Saurabh realised the power of social media early on and began following and analysing false narratives and ‘fake news’ even before he entered the field of fact-checking professionally. He is fascinated with the visual medium, technology and politics, and at Newschecker, where he leads social media strategy, he is a jack of all trades. With a burning desire to uncover the truth behind events that capture people's minds and make sense of the facts in the noisy world of social media, he fact checks misinformation in Hindi and English at Newschecker.
Facebook
Twitter
WhatsApp
Linkedin
Previous articleDid The United States Threaten Iraq With Coronavirus In 1990? Edited Video of Saddam Hussein Went Viral
Next articleSamajwadi Party Leader Ramakant Yadav Falsely Claims No Death Because Of Coronavirus