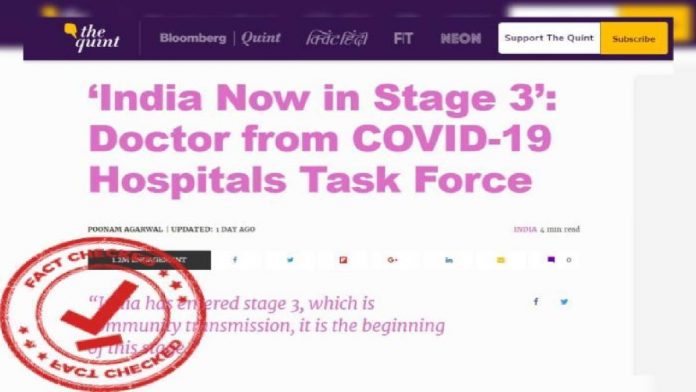 India has entered the third stage of the COVID-19 outbreak in which the community transmission takes place.

News and fact-checking outlet The Quint published a report in which they claim to have interviewed Dr. Girdhar Gyani, Director General, Association of Healthcare Providers (India). The Quint claims that Dr. Gyani in an interview with the outlet has claimed that India has entered the third stage which is community transmission and feared that the pandemic can spread fast in the community resulting in more positive cases and a rise in the mortality rate in India.

“India has entered stage 3, which is community transmission, it is the beginning of this stage.” This was the revelation made by Dr Girdhar Gyani, the convenor of the Task Force for COVID-19 Hospitals, in an interview to the to The Quint.

What is wrong with the report?

The sensational report published by The Quint was updated and the updates made are crucial enough to change the course of entire rhetoric made by the outlet. A Comparison of the two versions reveals heavy edits were made 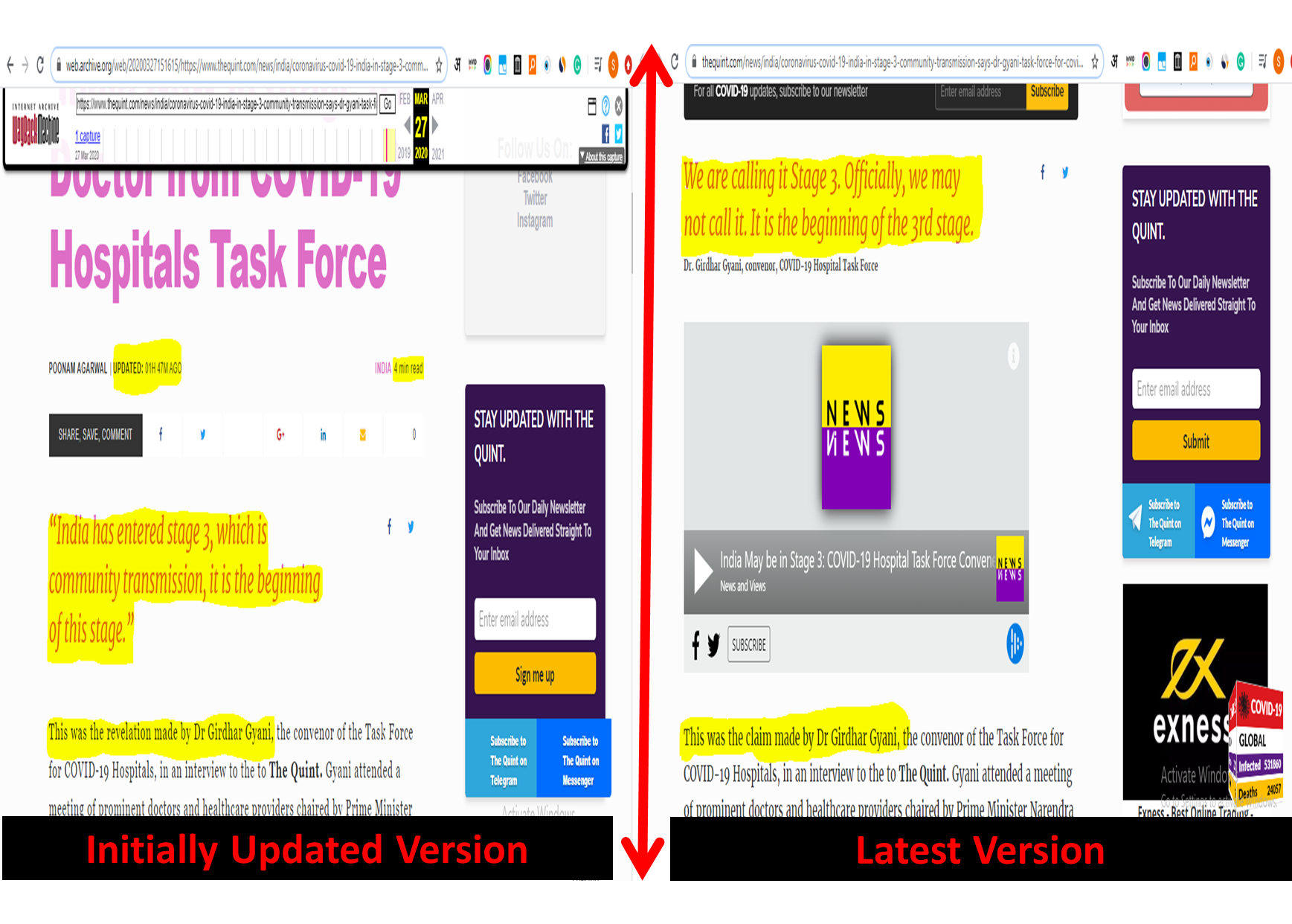 The Quint doesn’t mention the edits made to the report; hides major edits The Quint doesn’t just hide the said two edits made to the report but also hides the insertion of Dr. Gyani’s qualifications in the latest version which was not there in the first updated version. After noticing the heavy update in the report published by The Quint, we searched Google for more information on the issue and we found a report published by Livemint which quotes the same Dr. Girdhar Gyani to report that India has not entered the third stage. An excerpt from the Livemint report where the outlet has quoted Dr. Gyan, reads, ““When cases with no travel history or direct contact to diagnosed cases start coming in large numbers, then we take it as a beginning of community spread. Though in that sense, we are not in Stage 3, but it would be better that we do our preparations as if we are in phase-3. In case of community rise, numbers start rising exponentially,” said Dr. Girdhar Gyani, Director General, Association of Healthcare Providers.”

The preparations have already begun in Delhi, where government has started scaling up its health infrastructure .Stage 3 is community transmission, when the source of infection is not known for majority of the infected population and new positive cases can no longer be traced to diagnosed cases

Now, as we searched for more information on the issue, we found a tweet made by Editor, live services, news agency ANI namely Ishaan Prakash in which Prakash claims that ANI’s health reporter has reached out to Dr. Girdhar Gyani and Dr. Gyani says that the headline blown out of proportion. Prakash further quotes Dr. Gyani as saying, “Luckily till today increase in No. of cases is pure arithmetic while in community spread it goes geometrically or exponentially.”

ANI’s health reporter @journo_priyanka reached out to Dr Girdhar Gyani who says this headline was blown out of proportion. Dr Girdhar clarified, “luckily till today increase in No. of cases is pure arithmetic while in community spread its goes geometrically or exponentially” https://t.co/bDkRbvnmGP

We additionally searched the official website of the ICMR but we didn’t find any mention of Dr. Girdhar Gyani there. We also found a Facebook post made by the said organization where the organization has accused the outlet of misquoting and misinterpreting Dr. Girdhar Gyani.

#PIBFactcheck : An online news portal has carried an interview with DG, AHPI claiming that India is in Stage 3 i.e. community transmission stage of #COVID2019india . It is clarified that this is misleading and has been denied by the concerned person himself https://t.co/O0ZftC0f2F

Furthermore, the fact-checking arm of the PIB has posted Dr. Gyani’s clarification on the issue which he made while talking to the Indian public broadcaster Doordarshan.

Director General of the Private Hospital Association Dr Girdhar Gyani clarifies that India has not entered stage 3 of the #Covid19 infection pic.twitter.com/t1rJ29b5Yc

It is evident in our fact-check report that The Quint carried out a ‘Misleading’ report. It is imperative from various updates in the report published by The Quint that Dr. Girdhar Gyani’s statement was misquoted or falsely reported by the outlet. Hence it can be concluded that India has not yet reached the third stage of the COVID-19 outbreak and the report published by fact-checking and news outlet The Quint is ‘Misleading’.

Facebook
Twitter
WhatsApp
Linkedin
Previous articleIs He The Pakistani Doctor Usama Riaz Who Died After Treating COVID-19 Patients? No, Here’s A Fact Check
Next articleIs The Police In US Enforcing a lockdown? No, An Old Video Of A Protest In Azerbaijan Went Viral