We were tagged to fact check a video in which one can see many dead bodies and a person(Gender not known yet) skinning one of the dead bodies with a cleaver. There is a text message with the video that reads, “THE CHINESE HAVE BEGUN TO USE THEIR HUMAN CORPSE TO PROCESS INTO PRODUCTS SUCH AS CORNED BEEF TO SHIP TO AFRICA. Please share it with your contacts. Very important” 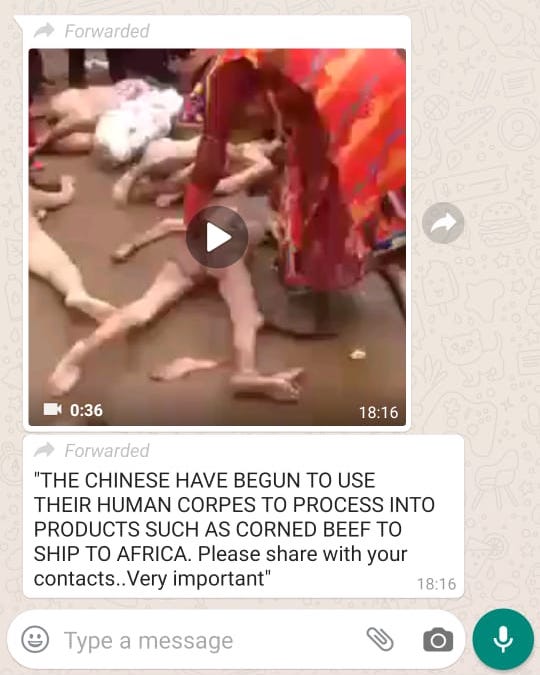 Coronavirus, an epidemic that has caused several casualties across the globe, has fallen prey to misinformation as several false or misleading claims are viral in its name. We have previously debunked several viral claims in the past that were shared in the name of coronavirus and were proved to have no relation with coronavirus or turned out to be false.

A video has been doing the rounds on social media which is shared with a claim that China has started processing the corpses of coronavirus infected people into products so they can be shipped to Africa in the name of products like corned beef.

As we began to fact check this claim, we first generated keyframes of the viral video so reverse image search can be performed. As a result of our reverse image search, we found a video uploaded on Facebook on 21st November 2016. The Facebook video claims that the Rohingya refugees are cannibals and they are skinning a corpse so they can use it as their food.

Since the video uploaded on Facebook dates back to 2016, it is evident that the video is not related to coronavirus in any sense as the coronavirus outbreak happened after December 2019.

As the video we found on Facebook seems unauthentic, we kept on searching for more information on the viral video. We further found a video on an Iranian video sharing website which claims that the Indian extremist Hindus are killing Muslims. We also found a video that was uploaded on YouTube on 9th November 2017.

We did a quick fact check of the claim shared on the Iranian video sharing website about three months ago but we didn’t find any authentic information to corroborate. So, we kept on searching for more information on the video and when we dug deeper, we found a video on a website that shares content related to gore. The video dated November 25, 2016, claims that the man shown in the video is skinning the dead body of a human being for dinner.

So maybe it’s not for dinner, but you never know, I could be right about this. A man is shown skinning dead humans like he’s slicing up chicken for dinner. It clearly ain’t a big deal to him.

The description of this video reads, “So maybe it’s not for dinner, but you never know, I could be right about this. A man is shown skinning dead humans like he’s slicing up chicken for dinner. It clearly ain’t a big deal to him. I don’t know if this is part of some kind of rituals like those performed before a sky burial or what, but he has clearly done it a few times. Ugh, when he gets to the feet is when I cringe.”

The description doesn’t emphasize the claim shared with the video. The description also suggests that the visuals might be of a part of a ritual called ‘Sky Burial’. According to Wikipedia, Sky Burial is practiced in the Chinese provinces and autonomous regions of Tibet, Qinghai, Sichuan, and Inner Mongolia, as well as in Mongolia, Bhutan, and parts of India such as Sikkim and Zanskar.

The description of the video leaves a clue that the viral video might be recorded in territories where Sky Burial is practiced. When we deeply observed the events in the video, we found a person shown in the video, wearing the same clothes as of Buddhist Monks. 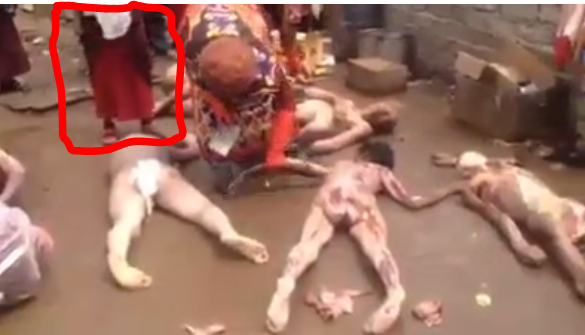 We began to collect more information about Sky Burial. In our investigation, we found multiple videos that talk about Sky Burial and suggest that similar acts are performed during the performance of the aforementioned ritual.

After watching all the videos mentioned above, we reached the conclusion that the video might be of Tibet or China’s Sichuan as residents of both these territories perform such rituals. However, we haven’t found the origin of this claim hence we can not emphasize whether or not visuals in this video belong to Sky Burial. But from our findings, it is evident that the video is in no way related to the coronavirus outbreak.

Saurabh Pandey
The reason why he chose to be a part of the Newschecker team lies somewhere between his passion and desire to surface the truth. The inception of social networking sites, misleading information, and tilted facts worry him. So, here he is ready to debunk any such fake story or rumor.
Facebook
Twitter
WhatsApp
Linkedin
Previous articleSAD Leader Manjinder Singh Sirsa Misleads Pakistan Punjab With Indian State Punjab
Next articleBJP MP Satyadev Pachauri Shares False Figures On Delhi Assembly Election Result