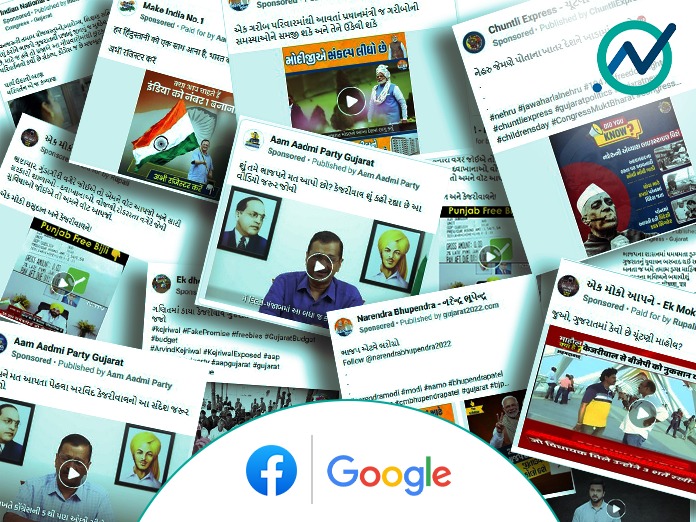 The much hyped Gujarat election is just days away and political parties are leaving no stone unturned to woo voters. From high profile political leaders hitting the campaign trail to advertisements in print and online media, parties are going all out in the fight for Gujarat. With a large section of the public having access to cheap smartphones and even cheaper internet plans, social media has become an important battlefield for political parties to fight the ‘perception war’. The last few elections have seen an increasing amount of money being spent by parties on their social media campaign.

Facebook and Google are two major platforms used by politicians and parties to advertise and push their content. A look at the ad spend data by Google and Facebook reveals interesting insights into the political spending in the lead up to the polls scheduled for December 1 and 5.

Over 72 lakhs has been spent by political parties to run advertisements from their official Facebook accounts in the duration of one month from October 13 to November 11.

Statistics made available by Facebook show that the Aam Aadmi Party has been the top spender in the last month with a total ad spend of  39 lakhs for 35 advertisements. While the BJP, currently in power in Gujarat, spent only 19 lakh rupees- much less in comparison with the AAP –  on 558 advertisements it ran from its official account. The Congress party meanwhile, also looking to strengthen its foothold in the state, ran 368 advertisements for a cost of 13 lakh rupees.

A look at the list of advertisers on social issues, elections or politics, reveals that for the duration of last month, the amount of total money spent by advertisers in Gujarat in this category is upwards of 4 crores. Here is a list of all the social media pages and their expenditure on election related posts:

On analysing the Google adspend data, which reveals the spending on political advertisements on different websites, from October 13 to November 11, we find that the BJP ran more than 900 advertisements related to the elections, spending over 20 lakhs for the same. During the same period, Congress has spent 50 lakhs on more than 400 advertisements.

Curiously, there is no available information about advertisements from the official account of Aam Aadmi Party in the Google transparency.

(This article was first published in Gujarati by Prathamesh Khunt)

Pankaj Menon
Pankaj Menon is a fact-checker based out of Delhi who enjoys ‘digital sleuthing’ and calling out misinformation. He has completed his MA in International Relations from Madras University and has worked with organisations like NDTV, Times Now and Deccan Chronicle online in the past.
Facebook
Twitter
WhatsApp
Linkedin
Previous article
Anti-Hijab Protest: Iran To Execute 15,000 Protesters? No, Viral Claim Is False
Next article
Viral Screengrab Of Kohli’s Insta Story Showing Offensive Remark Against Pakistan After Loss To England In World Cup Is Edited