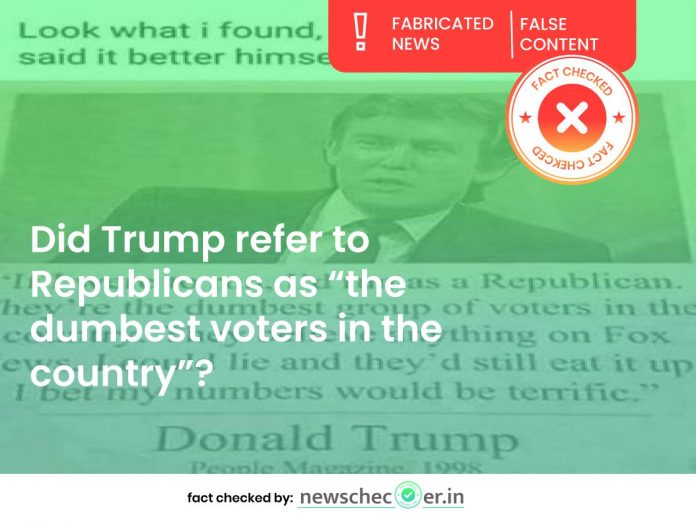 Social media users shared a quote attributed to Donald Trump alleging that he said Republicans are “the dumbest group of voters in the country.”

Trump’s alleged quote to People Magazine in 1998 reads, “If I were to run, I’d run as a Republican. They’re the dumbest group of voters in the country. They believe anything on Fox News. I could lie and they’d still eat it up. I bet my numbers would be terrific.”

As expected, the run-up to the United States Presidential election results saw a number of misleading and false claims circulating online.

A relevant keyword search on Google led us to a fact check done by Reuters in May.

It quotes a magazine spokesperson as mentioned in Factcheck.org, “People looked into this exhaustively when it first surfaced back in Oct. (2015). We combed through every Trump story in our archive. We couldn’t find anything remotely like this quote–and no interview at all in 1998.”

Snopes debunked this claim in 2015. This included Trump’s ideas of running for President on CNN’s Larry King Live in 1999. As quoted in Snopes, Trump said,

“I’m a registered Republican. I’m a pretty conservative guy. I’m somewhat liberal on social issues, especially health care, et cetera, but I’d be leaving another party, and I’ve been close to that party … I think that nobody is really hitting it right. The Democrats are too far left. I mean, Bill Bradley, this is seriously left; he’s trying to come a little more center, but he’s seriously left. The Republicans are too far right. And I don’t think anybody’s hitting the chord, not the chord that I want hear, and not the chord that other people want to hear, and I’ve seen it.”

Apart from this, we searched for credible evidence online related to any profile or interview People’s did on Trump, but could not find anything that supports this claim.

Trump did not refer to Republicans as “the dumbest group of voters in the country.” The 1998 People Magazine quote attributed to Trump is false.