Baloch activists burn flag of China and Pakistan protesting against illegal construction of CPEC inside #Balochistan. This is the reality.#FreeBalochistan. pic.twitter.com/lSd2nhUz3n

A video has been shared by a Twitter user, Asharaf Baloch, in which a group of angry men is seen burning the national flag of Pakistan & China. According to the claim, the protesters are Balochis and they are against the illegal construction of CPEC- China Pakistan Economic Corridor in Balochistan. This video has 2.9k retweets & 1.5k likes.

#proindia Baloch activists burn flag of China and Pakistan protesting against illegal construction of CPEC inside #Balochistan. This is the reality.#FreeBalochistan. pic.twitter.com/mLfhGI9SmQ

The same video has been shared on Facebook as well

To know more about the video we did a keyword search on Google which lead us to Dainik Jagran where an article was published with the headline ‘बलूचिस्तान में लोगों का उग्र प्रदर्शन, जलाया गया पाकिस्तान और चीन का झंडा’ i.e ‘Fierce demonstration of people in Balochistan, Pakistan and China flags burnt’. The article was published in 2016. 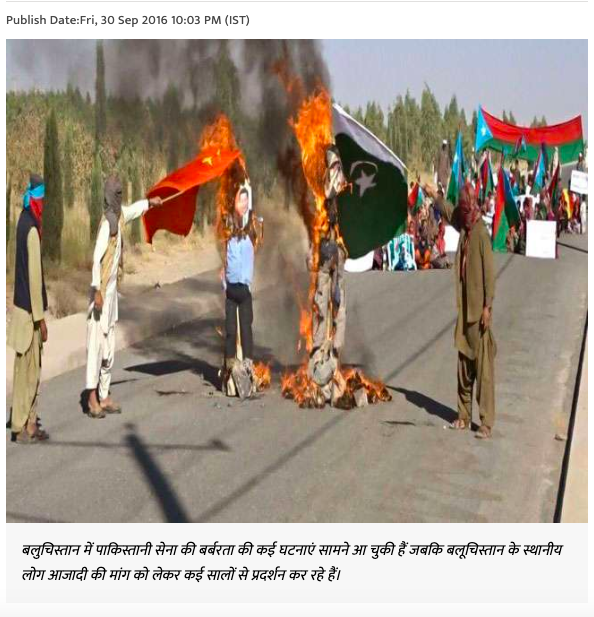 Though the article has a few pictures related to the viral video, to be sure that these images are indeed part of the video, we did a search on YouTube taking clues from the article.

After watching both videos carefully we came to the conclusion that the viral videos are indeed of a protest against CPEC in Balochistan but it took place in 2016 and is not a recent incident.