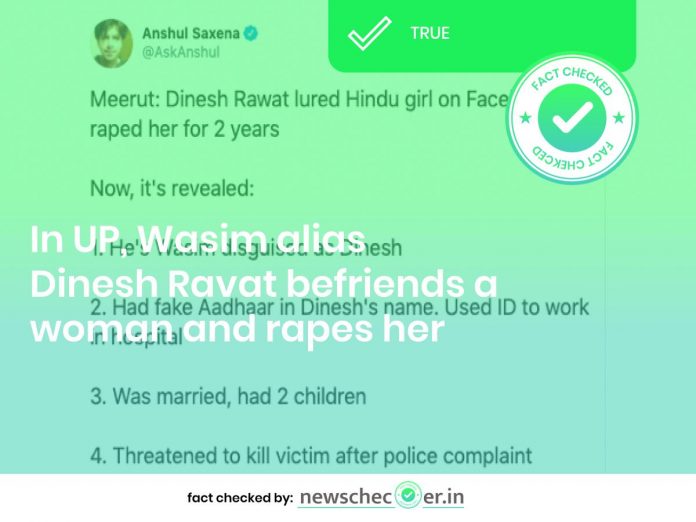 A tweet posted on 8 June, 2020 claims that a man named Dinesh Rawat lured a Hindu girl on Facebook and raped her for two years.

The tweet further states revelations which show that Wasim disguised himself as Dinesh. He had a fake Aadhaar card in the name of Dinesh and used it to work in a hospital. He’s also married with two children, and threatened to kill the victim after the police complaint.

Through a relevant keyword search we came across news reports which detailed the claim in context. Wasim Ahmed, a resident of Ajrada, who worked in a hospital in the Nauchandi area of Meerut using an Aadhaar card created in the name of Dinesh Ravat. Married with two children, he also has a Facebook account with the name Dinesh Ravat, state the news reports.

This incident came to light when a complaint was filed against Wasim alias Dinesh for raping a woman from the Hapur district in Uttar Pradesh. He was later arrested and a case of rape and another case under the IT Act were lodged against him.

A Youtube video posted on 8 June, by Pulse 24 News details the same incident. See video below.

To learn and seek confirmation on this incident, we contacted Meerut’s SP Avinash Pandey who confirmed three out of four statements made in the initial tweet claim. Regarding the third point made in the claim, “Was married, had 2 children,” news reports linked in this story make it clear.

We also contacted Anshul Saxena, who tweeted this claim last week asking for the source of his tweet’s content. He shared this news report and Youtube video in response to our query via Facebook messenger.

A confirmation from Meerut’s SP Avinash Pandey and news reports make it clear that the statements made in the claim are true. Wasim alias Dinesh Ravat befriended a Hindu girl from Hapur district and raped her. Married with two children, he used a fake Aadhaar ID made in the name of Dinesh to work in a hospital. He also threatened to kill the victim when she reported this matter to the police.