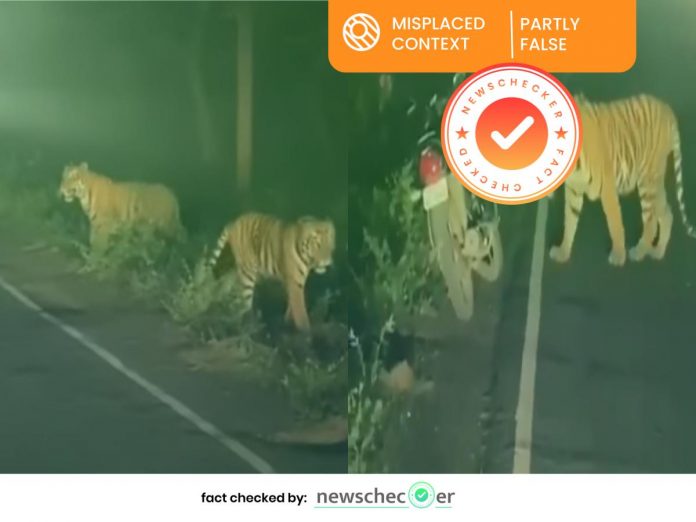 Mahindra Group Chairman, Anand Mahindra is well known on social media for sharing some fascinating videos that entertain and sometimes leave his followers in awe. On August 23, Mahindra shared one such video of tigers spotting allegedly on the Panchgani Mahabaleshwar highway. In his tweet, he compared the Mahindra XUV to a tiger claiming that “the  XUV isn’t the only big cat on the highway”

The movement of tigers along highways, especially in reserved forest areas, is a common sight in India. Just last year, on the eve of Global Tiger Day, the Environment Minister released a Tiger census report and announced that Indian tigers contribute to 70% of the tiger population in the world.

The spread of the Covid-19 pandemic in early 2020 and the lockdown that followed in March last year had many social media users commenting on the forces of nature. In the initial days of the lockdown, videos of animals & other wildlife were shared by users claiming that nature is reclaiming its territory. While many of these were genuine posts, we also found some to be untrue and debunked them.

To fact check this claim, we fragmented the viral video into keyframes and carried out a reverse image search which led us to reports published by the Indian Express and Punekar News, among others.

On searching specific keywords “panchgani mahabaleshwar road tiger” on Google, we found an NDTV report highlighting that several users had flagged the video shared by Anand Mahindra saying that it was not recent.

An analysis of media reports around this tweet did not offer any clarity on the location, time and context of the said video. Using another keyframe from the video, we performed a reverse search again. The search results indicated that the video is indeed old and does not correspond to the time alleged in the tweet by Mahindra as well as the aforementioned media reports.

However, a basic google search with the term “Bengal tiger” and one of the keyframes of the video throws up links of the same video published as early as February 2021.

On searching more keyframes of the same video in combination with a variety of keywords, we found a YouTube video published by user “Trans Fitness” with similar scenes. This video, titled “TIGER TIGRESS AMAZING SIGHTING IN TADOBA NIGHT SAFARI NEAR NAGPUR. TIGER CAME NEAR GYPSY”, was published on 29th November 2019.

The description shared along with the video reads, “ Save Tigers. Message to all from TRANS FITNESS.”

In addition to this, Sushant Nanda, a serving IFS officer of the Odisha Cadre tweeted the same video over a month ago.

While we are unable to verify the exact location and time of this video, it is evident from our findings that the viral video is not recent and can be traced back at least to early 2019.

Saurabh Pandey
The reason why he chose to be a part of the Newschecker team lies somewhere between his passion and desire to surface the truth. The inception of social networking sites, misleading information, and tilted facts worry him. So, here he is ready to debunk any such fake story or rumor.
Facebook
Twitter
WhatsApp
Linkedin
Previous articleOld Video Shared With Misleading Context As “Ashraf Ghani Fleeing Afghanistan As Taliban Takes Control”
Next articleVideo Of Crowds At An American Football Game Shared As That Of Scenes Of Afghans Fleeing From The Taliban At Kabul Airport