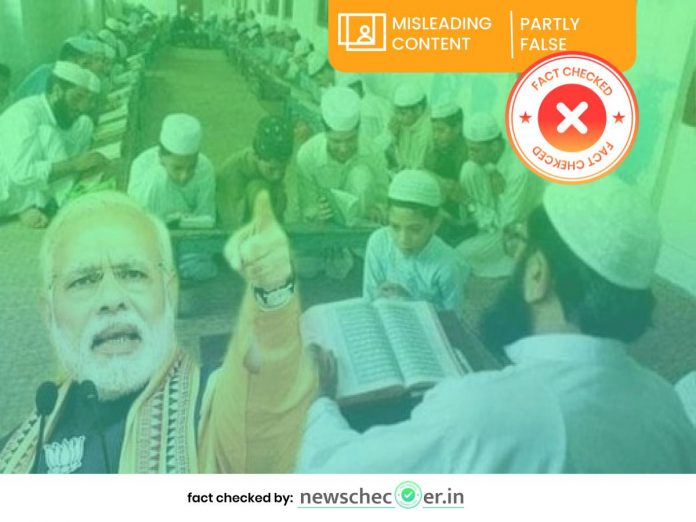 In view of the upcoming state Assembly elections in Assam, it’s unsurprising that related misinformation is shared on social media platforms. An image which includes PM Narendra Modi is shared with a claim that the Assam government has decided to close all the madrassas in the state.

One such Facebook post with a caption “Jai Shri Ram” written in Hindi includes an image of students at a madrassa with PM Modi in the forefront. The image includes text which when translated to English reads, “All madrassas in Assam will be closed. Whoever is happy with this say Jai Shri Ram.”

You can see another example of this claim shared last year below.

Through relevant Google search we came across multiple news reports which stated that all state-run Madrassas will be closed and converted into regular schools. It also said that Sanskrit schools will also be closed.

Regional news reports by Navbharat Times and News18 also report that only state-run madrassas along with Sanskrit schools will be closed. Related private institutions will be allowed to function with prior permission and regulations.

“A bill, seeking to abolish all state-run Madrassas and transform them into regular schools, has been passed by Assam Legislative Assembly, “ reads a 30 December 2020 New Indian Express report.

As per the New Indian Express report, Assam Minister Himanta Biswa Sarma said that “in order to facilitate a secular education system in Assam, the state government has decided to make ‘education secular’ and 198 high madrasas and 542 other madrasas in the state will operate as any other general educational institute and will not give admission to students for theological studies.”

Further, we found a related video on TV9 Bharatvarsh‘s YouTube channel. Here, the Assam Education Minister Hemant Biswa Sharma can be seen saying that the madrassas run by social institutions and NGOs will run as they are and will not have any problem. But they will have to function within a regulatory framework which includes disclosing the number of students as well as teaching regular subjects along with religious subject matter.

“Private madrassas will be regulated and not closed” explains Assam education minister in video by Hindustan Times.

Our research makes it clear that Assam is not closing all madrassas in the state. Only state-run madrassas and Sanskrit schools will be closed and converted into regular schools.