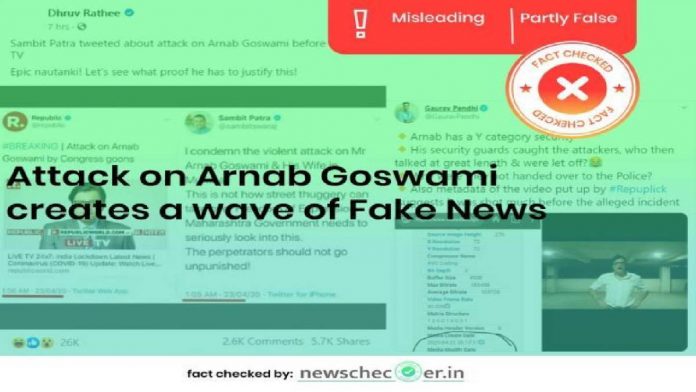 Congress affiliated social media activist Gaurav Pandhi claimed that the Metadata of the video statement released by Arnab Goswami shows that the video was recorded before the attack.

Arnab Goswami, who is the editor of Republic TV, was attacked on 23rd April after he locked horns with the Congress Party. The attack on Arnab created a storm on social media as many condemned the attack on Goswami on one hand while on the other hand, many took a jibe at him by presenting supposed proof of the attack allegedly being preplanned.

An archived version of Gaurav’s tweet can be viewed here.

To check the authenticity of the claim made by Gaurav Pandhi, we first searched Arnab’s video statement and we found the same Twitter video, metadata of which was presented by Gaurav.

We ran the video tweeted by Republic TV through the same metadata provider website metadata2go.com and found that the metadata of the Republic TV matches the metadata cited by Gaurav Pandhi ie 2020:04:23 16:11:56. The same can be viewed here.

We picked a random video tweeted by Republic TV to analyze the metadata. We downloaded the video and ran it through metadata2go.

Since it is clear that the time shown in the metadata produced using metadata2go is in the Zulu time zone (UTC +0), we now tried to know if the metadata produced by third-party websites for Twitter videos shows the actual date and time of creation or not. To understand this, we checked the handler name of the video which we ran through metadata2go and we found that the handler name is shown as Vireo Eyes v2.5.3.

We also found a Github repository by Twitter which confirms the details mentioned above. An excerpt from the repository throws more light on how the metadata of the media uploaded on the platform is stripped, “Vireo is built on top of best of class open-source libraries (we did not reinvent the wheel), and defines a unified and modular interface for these libraries to communicate easily and efficiently. Thanks to a unified interface, it is easy to write new modules (e.g. new codec) or swap out the existing ones in favor of others (e.g. proprietary or hardware H.264 decoder).”

Additionally, we also found that between 7 pm and 10 pm on 22nd April, Arnab Goswami hosted two debate shows, one for Republic Bharat and the other for Republic TV.

Hence it is evident from our fact-check that the metadata presented by Gaurav Pandhi doesn’t prove that Arnab Goswami’s video statement was not recorded before the attack on him.

Result: From the evidence presented above in our fact-check, it is evident that the metadata which is presented by Gaurav Pandhi does not prove that the video statement of Arnab Goswami was recorded before the attack. Hence it can be concluded that the claim made by Gaurav Pandhi is ‘Misleading’.

Verification of the second claim: Dhruv Rathee, a YouTuber who told the BBC that he started busting fake news because he was frustrated at seeing the spread of fake news, made a Facebook post to claim that BJP spokesperson Sambit Patra tweeted about the attack on Arnab Goswami before Republic TV.

Since Dhruv Rathee has deleted his Facebook post without posting any clarification, an archived version of the same can be viewed here.

National Campaign Incharge of the Indian Youth Congress Srivatsa also made the same claim as Dhruv Rathee did.

As we began investigating the claims made by Dhruv and Srivatsa, we found that Republic TV indeed made a tweet at 1:11 AM to report the attack.

We also found that Sambit Patra and Ashok Pandit as claimed by Dhruv and Srivatsa indeed tweeted about the attack before Republic TV.

However, several social media users have clicked the images of the broadcast on Republic TV reporting the attack on Arnab Goswami.

Images clicked by users show that Republic TV reported the attack at 12:35 AM on-air which can be seen below.

Images clicked by users showing Republic TV reported the attack at 12:59 AM can be seen below.

We also found a tweet made by a user at 12:39 AM to report the attack.

At 12:48 AM, the same user has posted an image that further backs the evidence that Republic TV has reported the attack on Live TV well before making the tweet that reports the same.

Hence it is evident from our fact-check that the claims made by Dhruv Rathee and Srivatsa are ‘Misleading’ as Republic TV reported the attack on Arnab Goswami at least 40 minutes before making the tweet.