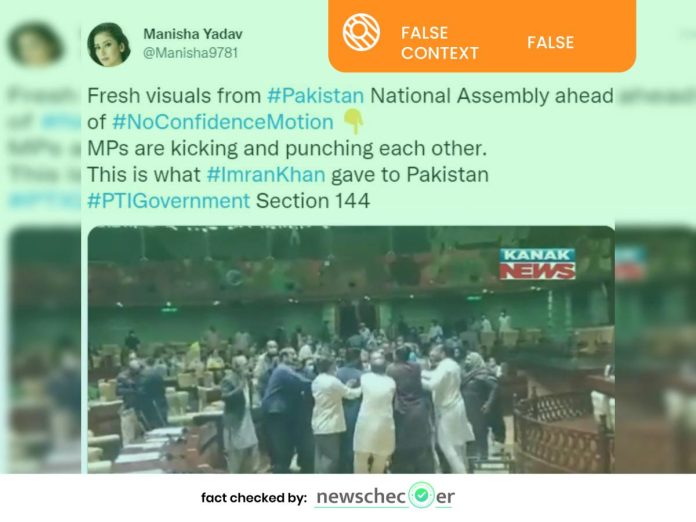 A video of Pakistani MPs fighting amongst themselves inside the Assembly hall is going viral on social media, claiming to show the latest visuals from the Pakistan National Assembly ahead of the no confidence motion against Imran Khan. In the video, an MP is being restrained while a fight breaks out between a group of people.

The video has been shared by Twitter user @Manisha9781 which has garnered around 35,000 views along with the caption ‘Fresh visuals from #Pakistan National Assembly ahead of #NoConfidenceMotion. MPs are kicking and punching each other. This is what #ImranKhan gave to Pakistan #PTIGovernment Section 144.’

In Pakistan the no-trust vote was introduced by the joint opposition against Pakistan Prime minister Imran Khan was dismissed by the Deputy Speaker, Qasim Suri after declaring it a ‘foreign conspiracy.’ Following which the National Assembly of Pakistan was dissolved. Social media has been abuzz with misinformation and misleading claims following these events.

Newschecker conducted a Google reverse image search on the key-frames of the viral video to ascertain its authenticity and found a longer version of the video on the Youtube channel of Kanak News uploaded on 4th March, 2021.

According to the video, the incident is from the Sindh Assembly. Kanak News is an Orissa based News channel started by Eastern Media Limited.

Upon performing a keyword search, Newschecker found a news report by Dawn uploaded on 3rd March, 2021.

According to the report “after the Pakistan Tehreek-i-Insaf alleged that three of its MPAs from Sindh had gone “missing”, the provincial assembly witnessed an ugly physical brawl between members of the PTI and Pakistan Peoples Party on Tuesday as soon as the missing members entered the house and the former tried to get hold of them ahead of the Senate election.”

Upon further investigation, Newschecker found a News report from Pakistan based News organisation Geo News which contained the visuals which were an exact match of the viral video. The video, titled ‘Sindh Assembly mein Hatha-pai, Talkh Kalami aur Shor-sharaba…!!’ was uploaded on their official Youtube channel on 2nd March, 2021.

According to the investigation by Newschecker, an old video from 2021 from the Sindh Assembly is being passed off as showing the latest visuals from Pakistan National Assembly ahead of the no-confidence motion.

Vaibhav Bhujang
Vaibhav is a part of Newschecker’s English team, where he spots and debunks all kinds of misinformation, making the rounds on the internet. A Journalism graduate from St. Xavier's College, Mumbai, he holds an M.A degree in Philosophy and an M.Phil from Delhi University.
Facebook
Twitter
WhatsApp
Linkedin
Previous article
Explained: What Is The XE Mutant, The New Variant That Is More Transmissible Than Omicron?
Next article
Video Of Youth Climbing Mosque & Waving Saffron Flag Is Not From Karauli Violence