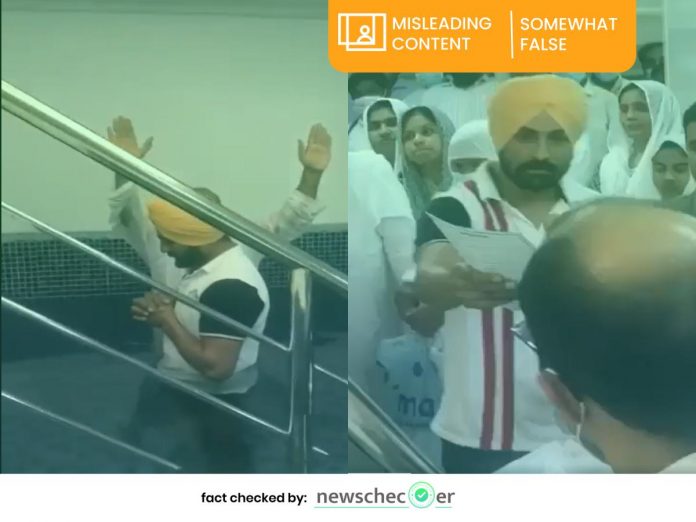 A video showing a Sikh man being baptized is being widely shared on social media claiming the man to be the new Chief Minister of Punjab, Charanjit Singh Channi.

The minute-long video has had thousands of views on Facebook and is shared several times on Twitter since October 7.

Newschecker received a request from a user on its WhatsApp helpline number (+91 9999499044), to check the veracity of this message.

Analyzing the viral video, Newschecker found the claim to be false. At the 29-second mark in the video, we can hear the pastor referring to the man as Simranjeet Singh.

“…I baptize Simranjeet Singh as Samuel in the name of the father, the son, and the holy ghost in water.”

Further, a visual analysis of the person in the video clearly indicates he is not CM Channi. You can see the difference between the CM and the person seen in the viral video in the pictures below.

Newschecker is unable to ascertain the identity of the man in the video. We will update the copy as and when we have the details.

Channi took oath as the CM of Punjab on September 20 following which several unsubstantiated claims on his faith have been viral on social media.

It is clear from our investigation that the man baptized in the viral video is not CM Channi. The video falsely draws a connection between a Sikh man and CM Channi.