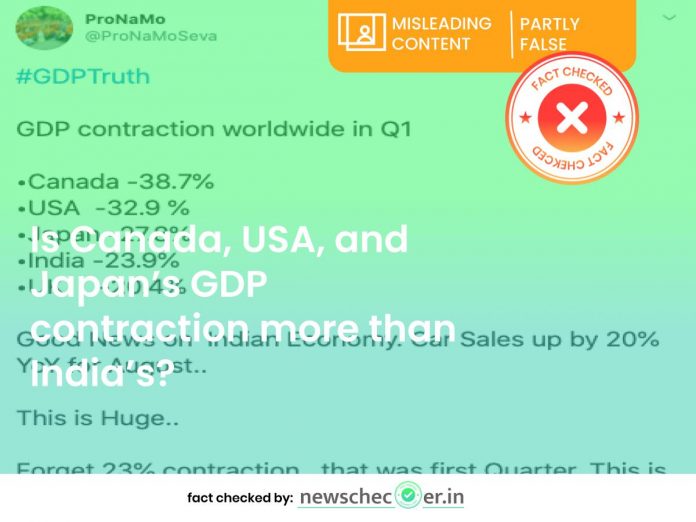 Using the handle @ProNaMoSeva the user further states that car sales are up by 20% YoY for August. The tweet reads:

Good News on  Indian Economy. Car Sales up by 20% YoY for August..

Forget 23% contraction , that was first Quarter. This is Latest news”

IndiaToday in its special show News Unlocked With Rajdeep Sardesai aired an infographic, which shows the economy of the United States as represented by its GDP, contracted by 32.9%. This was worse than India’s contraction of 23.9% and the five other countries mentioned.

Recently, India reported a 23.9% fall in its GDP for the April-June quarter (Q1)—the worst quarterly contraction on record. Around the same time, news on the GDP of other major economies of the world was also reported.

It was around this time that various social media users claimed that the GDP of Canada, United States, and Japan contracted more than India’s.

First, let’s note that the contraction or growth of the United States’ GDP is calculated differently than India’s. Therefore, the comparison of GDPs of the two countries in the claim is wrong.

The United States Bureau of Economic Analysis (BEA) explains why it publishes per cent changes in quarterly series at annual rates here. Therefore, as per BEA’s second estimate released on 27 August, the quarterly non-annualised contraction of the United States is at 9.1%.

Here’s another explainer on the two US GDP figures doing its rounds on social media.

GDP Comparison To Other Countries

If we’re to compare economic growth or contraction as represented by the GDP’s of Canada, Japan, and the United Kingdom (other countries mentioned in the claim) to India, we would use the following year-on-year data in the same time period:

Regarding the second part of the claim which states that India’s car sales have gone up, you can read more about it here and here.

Our research makes it clear that the claim which states the GDP of Canada, Japan, and the United States has contracted more than India’s is misleading. The figures do not represent a year on year calculation of the country’s GDP, which is how the Indian economic growth or contraction is calculated.