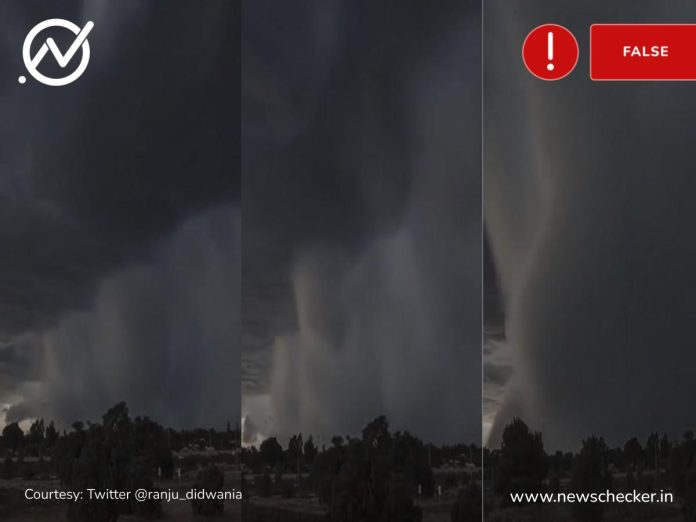 As flash floods and incessant downpour wreak havoc in Bengaluru, social media platforms are inundated with visuals of waterlogged streets, partially-submerged vehicles, and evacuations of residents using tractors and boats. Amid this, a 13-second-long-video showing a massive blanket of clouds billowing and seemingly descending on the streets is going viral on social media platforms. It is being claimed with the video that this is the time-lapse footage of a cloudburst in Bengaluru. Newschecker found the claim to be untrue.

The video of an alleged cloudburst in Bengaluru has also found its way on YouTube.

Links to such YouTube videos can be found here, here, here and here.

Newschecker also received the same video on our WhatsApp tipline ( +91-9999499044) requesting to be fact checked.

On carefully analysing the movement of vehicles seen in the video we could conclude that it is indeed a time-lapse footage. But does it show a cloudburst in Bengaluru? To answer the same, Newschecker conducted Google reverse image search on the keyframes of the viral video which led us to a Reddit post of August 8, 2022 carrying the same video. As per the Reddit post, the video is from Perth, Australia.

Taking a clue, we looked up keywords “time -lapse storm Perth Australia” on Google which led us to a report by The Weather Channel, dated August 7, 2020, titled “Time-Lapse Shows Wrath of Severe Storm in Australia.” Displaying what appears to be a landscape version of the viral video, the report featured Meteorologist Ari Sarsalari discussing a time-lapse video of a severe storm as it moves in over Perth, Australia.

On comparing the keyframes of the viral video with the one featured in ‘The Weather Channel’ report, we could conclude that both the clips were from the same incident.

The video in the report was credited to Kane Artie/Severe Weather Australia. A Google keywords search for “Kane Artie,” “Severe Weather Australia,” “Storm” and “Perth” yielded a Facebook post by @KaneArtiePhotography, dated February 25, 2020, carrying the landscape version of the viral video. The post was captioned, “Well this afternoons front that rolled in was something else! I made a last minute dash down the road to the viewing area at the Perth Airport as I knew I would have a nice open area to shoot. So glad I did…..”

Following this, we looked up “Perth Storm” on Google, setting the time frame of the search from February 1, 2020 to February 28, 2020, and found multiple reports on the same. One such report by Daily Mail, dated February 25, 2020, also featured the video.

Other reports about this Perth storm of February 2020 can be seen here, here and here.

Viral posts claiming to show a time-lapse footage of cloudburst in Bengaluru are false. The video neither shows a cloudburst, nor it is from Bengaluru.

Vasudha Beri
Vasudha noticed the growing problem of mis/disinformation online after studying New Media at ACJ in Chennai and became interested in separating facts from fiction. She is interested in learning how global issues affect individuals on a micro level. Before joining Newschecker’s English team, she was working with Latestly.
Facebook
Twitter
WhatsApp
Linkedin
Previous articleSocial Media Users Troll Raghuram Rajan After Falling For Satirical Piece
Next articleChants Of Om At ‘Queen Elizabeth’s Farewell’? No, Viral Video Is Over 10 Years Old