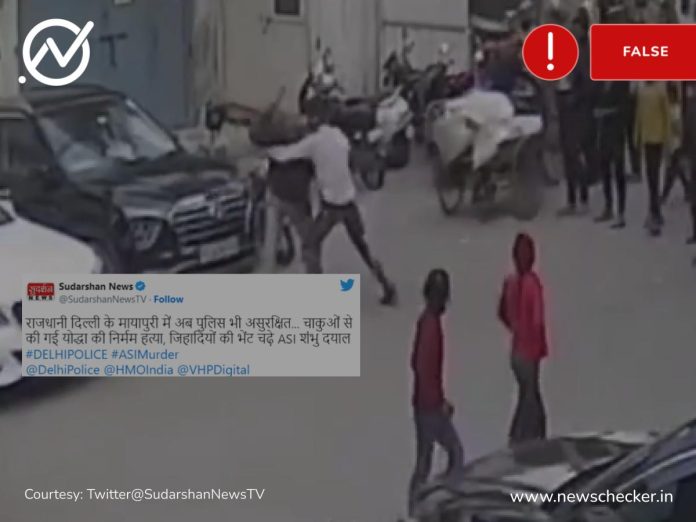 Delhi Police ASI, Shambhu Dayal, who was stabbed multiple times by a thief in the city’s Mayapuri area last week, succumbed to his injuries on Sunday. Soon after, several social media users poured in their respects, tributes and condolences to the Delhi police officer, while calling for a strict action against the accused. Sharing the outrage, some users gave a communal angle to the incident by referring to the accused as “Jihadi Anish,” “Mohammad Anish,” while others identified him to be “Anis/Anees.” Newschecker found that the claim to be misleading.

In a tweet dated January 8, 2022, BJP leader Khemchand Sharma said, “ASI Shambhu Dayal Ji who was undergoing treatment at a hospital after being stabbed with a knife by Jihadi Anish in Delhi’s Mayapuri area, succumbed to his injuries. Om Shanti. Such criminals deserves encounters not a slow legal trial. (sic)”

A Google keyword search for “ASI Dayal,” “stabbed,” “death,” & “Delhi” yielded multiple reports from the past one week identifying the accused in the case as one “Anish,” – neither “Mohammad Anish,” nor “Anees.” The reports did not mention any communal angle to the incident either. Such reports can be seen here, here and here.

One such report by The Indian Express, dated January 11, 2023, stated,”ASI Shambhu Dayal was taking a robbery accused to the police station when he was stabbed on January 4. He succumbed to his injuries on Sunday.”

It further elaborated, “The police said a woman had approached Dayal, who had recently joined the Mayapuri police station, for help after her phone was allegedly snatched by a man at knifepoint. Dayal took the complainant to the spot to identify the accused. The woman pointed out the person and he caught the accused, Mayapuri resident Anish Raj (24). While Dayal was taking Anish to the police station, the latter allegedly pulled out a knife which he had kept hidden under his shirt and attacked him.”

Another report by Outlook, dated January 11, 2023, identified the accused as Anish Raj.

Further, we also learnt that the Delhi Police have clarified that there was no communal angle to the incident. The police have further identified the accused in the killing of ASI Dayal as Anish Raj, son of Prahlad Raj.

In a tweet dated January 11, 2023, the Delhi Police said, “The name of the accused who killed ASI Shambhu Dayal is Anish Raj, son – Prahlad Raj. He is a criminal. While the accused was being caught in a case of mobile theft, he attacked the ASI with a knife. The matter is not communal. Wrong and misleading information is being given by some handles in social media.”

Vasudha Beri
Vasudha noticed the growing problem of mis/disinformation online after studying New Media at ACJ in Chennai and became interested in separating facts from fiction. She is interested in learning how global issues affect individuals on a micro level. Before joining Newschecker’s English team, she was working with Latestly.
Facebook
Twitter
WhatsApp
Linkedin
Previous article
Old Video From Nepal Linked To Recent Earthquake In Indonesia
Next article
Vivek Agnihotri’s The Kashmir Files ‘Shortlisted’ Or ‘Nominated’ For Oscars? Know The Truth Here