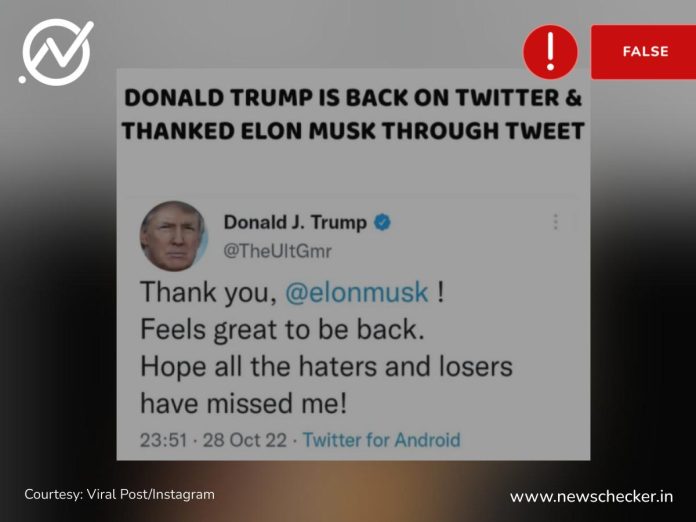 With billionaire Elon Musk completing the $44Bn takeover of Twitter, social media began buzzing with speculation that the move may pave the way for former US President Donald Trump’s return to the social media platform. Trump, a prolific ‘tweeter’, was banned from Twitter last year after the capitol hill violence that rocked America.

It is in this context that a viral screengrab of a purported tweet by Donald Trump, thanking Musk for facilitating his return, is going viral on social media platforms.“Thank you, @elonmusk! Feels great to be back. Hope all the haters and losers have missed me!” reads the viral screengrab.

But is Trump really back on Twitter? The answer is NO. Here is why.

The Twitter handle seen in the viral screenshot is ‘@TheUltGmr’. On looking up the handle @TheUltGmr on Twitter, we found that the verified handle is a parody account. “We do a little trolling. (this is a parody) Smash players love me” read the bio of the page.

The tweet thanking Musk was indeed posted by the user on October 28, which garnered over 465k likes and around 68k retweets at the time of writing this story.

This shows that the purported tweet by Donald Trump, was in fact made by this parody account, which changed its username to the name of the former US President.

The bio also featured a YouTube link of a channel named UR2SLOW, which streams online video games. We also found that the official Twitter handle of Donald Trump @realDonaldTrump is still suspended.

Soon after reports of the Twitter takeover by Musk, Donald Trump hailed the move, saying that the social media platform “is now in sane hands, and will no longer be run by Radical Left Lunatics and Maniacs that truly hate our country”, NDTV reported.

Before that, a purported statement of Trump also went viral congratulating Musk for purchasing Twitter and mentioning that his account (Trump’s) would be back by October 31 or Monday. This statement was later proved to be fake.

If you would like us to fact-check a claim, give feedback, or lodge a complaint, WhatsApp us at 9999499044 or email us at [email protected]r.in. You can also visit the Contact Us page and fill out the form.

Arjun Deodia
An Electronics & Communication engineer by training, Arjun switched to journalism to follow his passion. After completing a diploma in Broadcast Journalism at the India Today Media Institute, he has been debunking mis/disinformation for over three years. His areas of interest are politics and social media. Before joining Newschecker, he was working with the India Today Fact Check team.
Facebook
Twitter
WhatsApp
Linkedin
Previous article
Neither Agartala, Nor Barabanki, Viral Video Of Explosion Is From Guwahati
Next article
Viral Image Of Smriti Irani Reading Book On Rahul Gandhi’s Schedule Is Edited

Imran Khan Shot At: This Photo Is Not Related To The Recent Attack On The Ex-Pak PM