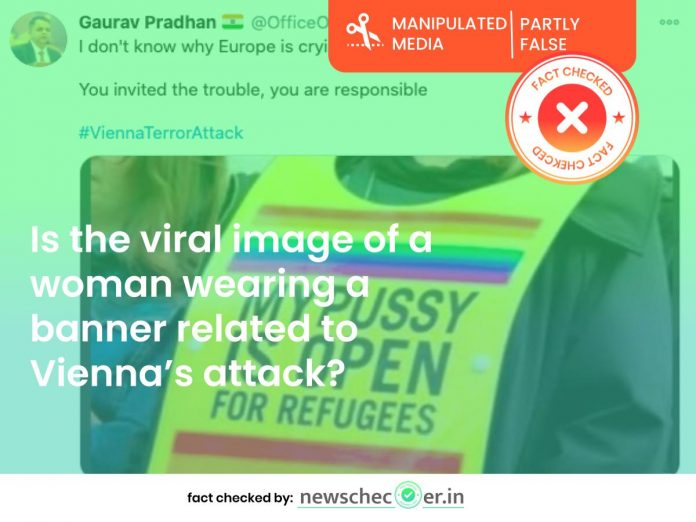 An image which shows a woman wearing a banner is being shared with claims related to the recent attack in Vienna. This banner reads, “My pussy is open for refugees.” It’s shared with the claim, “I don’t know why Europe is crying now? You invited the trouble, you are responsible #ViennaTerrorAttack”

Other social media users shared this claim as well.

These claims come after the recent shooting near Vienna’s central synagogue. As per a BBC report, a 20 year old who was released from jail in December was identified as the gunman. “Jihadist group Islamic State (IS) claimed on its propaganda outlet Amaq that it was behind the attack.”

Another claim with the image in context was circulating on social media in August. You can see an example of this here.

A Google reverse image search of the photograph in context led us to a 2018 article published by metro.co.uk.

The original image was shot in 2015 by a Canadian digital reporter, Lasia Kretzel, during a Syrian refugee support rally in Saskatchewan, Canada. The actual sign read, “My door is open for refugees,” per the article.

It further states that when Nigel Farage, leader of @BrexitParty_UK, shared an edited version of the image apparently believing that it’s true, Kretzel responded with a series of tweets clarifying the facts.

She writes, “A woman, whose name I do not know, was wearing an Amnesty International pre-made sign around her neck which, in the original photo, read “My door is open for refugees.”

Further, the photo was “edited (poorly) and redistributed around the internet for various unrelated, primarily anti-immigration propaganda,” she adds.

You can read Kretzel’s explanation of the original image below:

The photograph in context was earlier viral with another altered sign, “My legs are open for refugees.” Snopes debunked this claim adding that the original version shot by Kretzel for “CKOM News, showed the logo for Amnesty International, a human rights group that has been using the slogan “My Door Is Open For Refugees” since at least 2014.”

Amnesty International in a 2014 blog post wrote about their support to refugees under the banner of “My Door is Open for Refugees.”

Canadian reporter Lasia Kretzel wrote about the spread of fake news in relation to the photograph for The Guardian in 2018.

The original photograph of the woman wearing the yellow Amnesty International banner reads, “My door is open for refugees.” This is not related to the recent attack in Vienna. In fact, the image in the claim has been edited to spread fake news.