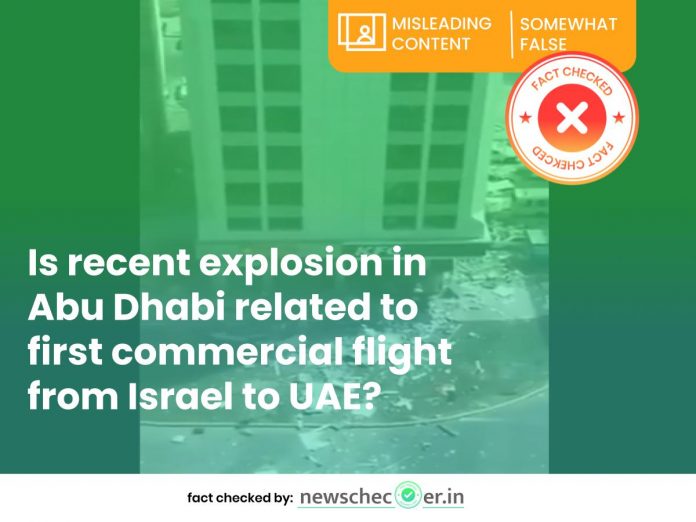 A Twitter user claims there were explosions in KFC and Hardee in Abu Dhabi ahead of the first commercial flight operations in the United Arab Emirates. The claim is accompanied by a video which shows the state of the American fast food joints post the explosion.

The tweet read, “Explosions in 2 American restaurants, KFC and Hardee’s in Abu Dhabi and Dubai ahead of first Israeli commercial flight operations in the Muslim kingdom. 2 messages in 1 operation?”

On September 1, Al Jazeera reported that “high-level delegations from Israel and the US have arrived in the United Arab Emirates (UAE), via the first-ever commercial flight between the Middle Eastern nations, to put final touches on a controversial pact establishing open relations.”

“Announced on August 13, the “normalisation” deal is the first such accommodation between an Arab country and Israel in more than 20 years and was catalysed largely by shared fears of Iran,” the report adds.

The aforementioned claim was tweeted and circulated on social media platforms in the light of the first commercial flight between these nations earlier this week.

Other users shared similar claims. You can see a few examples below.

A relevant keyword search on Google led us to an article by The Wire titled, “UAE: Three Killed and Several Injured in Restaurant Blasts in Abu Dhabi, Dubai.” The blast was caused by a “misalignment in the gas container fittings following refuelling” said the Abu Dhabi government media office, as per the article.

The Rashid bin Saeed Street where the explosions occurred “is also known as a main road to the airport, where top aides to US President Donald Trump and Israeli Prime Minister Benjamin Netanyahu are expected to land later on Monday, in a historic trip between Israel and another Arab country.”

The National, Abu Dhabi based daily newspaper, reported on the incident quoting the capital’s government media office and the police.

The Abu Dhabi government’s media office from its official Twitter account posted a thread of tweets detailing the incident.

Other news organisations have reported on the gas explosions damaging the ground floor restaurant and neighbouring building as well.

It’s true that the American fast food joints KFC and Hardee were damaged due to gas explosions in Abu Dhabi earlier this week. Although the claim’s implication that this explosion was related to the first-ever commercial flight between Israel and UAE is misleading.