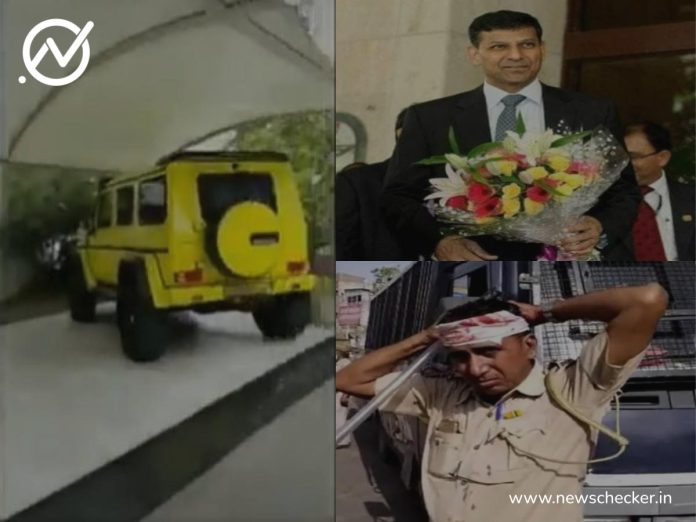 The menace of misinformation is ever persistent. Week after week, fact checkers find more and more content on social media, aimed at deceiving the users or furthering an agenda. Be it the news of Raghuram Rajan’s appointment as the Governor of Bank of England, or Kiran Bedi sharing a video footage from a 2017 movie, assuming it to be real, this past week, like every other, brought with it a new set of fake news/misinformation for fact checkers to shoot down.

From false claims about luxury cars belonging to former Sri Lankan PM Mahinda Rajapaksa’s son being set on fire, to false claims about Jodhpur police officer faking his injuries during the recent communal clashes, here are our top 5 fact checks of this week:

A video, which shows a set of parked luxury cars including Lamborghinis and a Limousine up in flames is going viral. Those sharing the video allege that these luxury cars set on fire belonged to the former Sri Lankan Prime Minister Mahinda Rajapaksa’s son. Newschecker has found the claim to be false. Read more here.

Social media platforms are swamped with congratulatory posts for Raghuram Rajan, with several users claiming that the former RBI governor has been appointed as the “New governor of Bank of England.” However, our investigation revealed that Raghuram Rajan has not been appointed as the governor of the Bank of England. The viral claim is false. Read more here.

Following reports of communal clashes in Rajasthan’s Jodhpur over Islamic flags on the Jalori gate circle ahead of Eid last week, a video showing a police official wrapping a blood stained handkerchief around his forehead is being widely shared on social media platforms. Those sharing the video claim that the police officer “faked” his injury by “wrapping red coloured cloth around his head”. Newschecker found the claims to be untrue. Read more here.

Several users on social media platform Twitter are sharing a 30-second video showing scores of people offering Namaz on a main thoroughfare, allegedly from Paris, France. There is no clarity on when the video is from, leading social media users to believe it to be  a recent incident. Newschecker has found the viral video to be from Russia. Read more here.

Former Puducherry Governor Kiran Bedi shared the video on her social media accounts, showing a sea creature attacking and bringing down a chopper mid-air. Newschecker conducted Google reverse image search by using keyframes of the video shared by Bedi and found the clip was a part of a Sci-fi movie released in 2017 called ‘5 Headed Shark Attack.’ Read more here.

Vasudha Beri
Vasudha noticed the growing problem of mis/disinformation online after studying New Media at ACJ in Chennai and became interested in separating facts from fiction. She is interested in learning how global issues affect individuals on a micro level. Before joining Newschecker’s English team, she was working with Latestly.
Facebook
Twitter
WhatsApp
Linkedin
Previous article
No, Raghuram Rajan Is NOT The New Governor Of Bank Of England, Viral Claim Is False
Next article
Sharad Pawar Called Himself ‘Baap’ Of Hindu Gods? Here’s The Truth Behind The Viral Claim