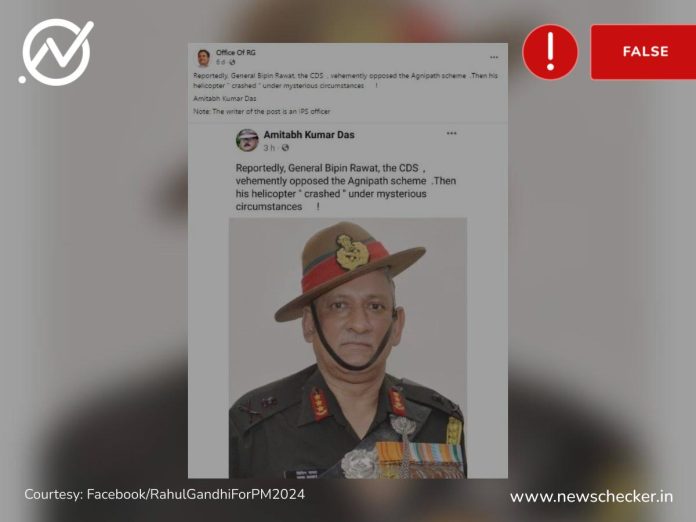 The text of the post suggests that late CDS General Rawat opposed the Agnipath scheme and eventually died under mysterious circumstances because of it. This article will only focus on whether Gen Rawat was opposed to the Agnipath scheme, as the other information is speculative and unverifiable.

The image has been shared on Facebook by a Facebook page called ‘Office of RG’ which claims to be the unofficial page of Rahul Gandhi and has around 1,80,000 followers on the platform. The social media post which has garnered 1,700 likes and 467 shares has been shared along with the caption ‘Reportedly, General Bipin Rawat, the CDS , vehemently opposed the Agnipath scheme .Then his helicopter ” crashed ” under mysterious circumstances ! Amitabh Kumar Das. Note: The writer of the post is an IPS officer’

We started our investigation by conducting a keyword search using the terms “Agnipath scheme” and “General Bipin Rawat” and found an article by Firstpost titled How’s the josh? Why Centre’s new Agnipath recruitment programme for soldiers is considered revolutionary uploaded on 14th June, 2022.

According to the article “the idea of the Agnipath recruitment scheme was first floated in 2020. The idea was the brainchild of late Chief of Defence Staff, General Bipin Rawat, who was looking at reducing the burgeoning pension bill as well as revenue expenditure in terms of salaries and other costs.”

The article quotes late CDS General Bipin Rawat stating that the army was in the process of implementing a project known as ‘Tour of Duty’ aiming to attract fit young male and female volunteers giving them a chance to serve in the Indian army, including its prestigious combat arms for three years both as officers and jawans. Under the Tour of Duty, the selected candidates will be put through one year training before inducting them into three year Army service.

The article quotes the late CDS General Rawat as saying “New approaches to both Short Services Commission and Tour of Duty are aimed to serve the twin purposes of increasing savings with a reduction in pay and gratuity payouts where the saved money could be utilised for the much needed modernisation and to fill the shortage of manpower.”
Newschecker found that late CDS General Bipin Rawat’s stance on Short Services Commission and Tour of Duty was widely reported in 2020 and found articles by the Print and News18 which relayed the same information.

Upon further investigation, Newschecker found an article by the Indian Express titled Special to Express | Tour of Duty: Don’t blunt our winning edge uploaded on 14th June, 2022 on their website.

According to the article the ‘Tour of Duty’ scheme was conceived in 2020 under the aegis of ‘Department of Military Affairs’ headed by then CDS General Bipin Rawat. The article further states “As part of the ongoing military reforms, the government is introducing ‘Tour of Duty’ (ToD) scheme called Agnipath, which is a short-term recruitment plan.” The underlying rationale for this proposition was to reduce the mounting defence pension bill, estimated to be over a third (including MOD civilians) of the defence budget, the article further noted.

Newschecker’s investigation reveals that the claim that late Chief of Defence Staff, General Bipin Rawat was against the Agnipath scheme is false but rather he is reported to have spearheaded efforts in this direction with the Tour of Duty scheme now renamed as Agnipath.

Vaibhav Bhujang
Vaibhav is a part of Newschecker’s English team, where he spots and debunks all kinds of misinformation, making the rounds on the internet. A Journalism graduate from St. Xavier's College, Mumbai, he holds an M.A degree in Philosophy and an M.Phil from Delhi University.
Facebook
Twitter
WhatsApp
Linkedin
Previous articleAditya Thackeray Did Not Drop ‘Minister’ From Twitter Bio
Next articleDid Bayer’s Top Executive Admit That mRNA Vaccines Are ‘Gene Therapy’? No, Statement Shared Out Of Context