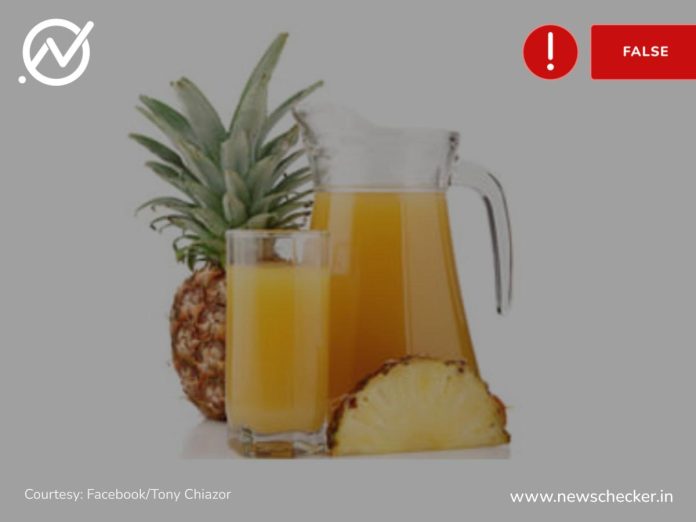 While the scientific community continues to research the cure for cancer, a viral social media post claims to have found a cure that  has “defeated cancer”- hot pineapple water. According to the viral message circulating in WhatsApp groups, adding a few slices of chopped pineapple to hot water and drinking this mixture can help boost the body’s ability to fight the disease. Newschecker has found the claim to be false.

The claim had earlier gone viral in 2021 on social media, with several users sharing the post as genuine. You can see one such post here.

Newschecker received this claim on our WhatsApp tipline (+91 9999499044) requesting it to be fact checked.

“The hot pineapple fruit has the effect of killing cysts and tumours.  Proven to repair all types of cancer. Hot pineapple water can kill all germs and toxins from the body as a result of allergies. The type of medicine with pineapple extract only destroys violent cells, it does not affect healthy cells. In addition, amino acids and pineapple polyphenols in pineapple juice can regulate high blood pressure, effectively preventing the blockage of inner blood vessels, adjusting blood circulation and reducing blood clots,” it further adds.

To begin with, Newschecker looked up Dr Gilbert A Kwok, who is purportedly a professor  of ICBS general hospital. Despite extensive search, we did not find any leads with the name. We further looked up the keywords “Hot Pineapple water” on Facebook and found several posts that shared the same information. But these posts quoted one Dr Gilbert A Kwakeye instead of Kwok, and identified him as a doctor with the ICBS hospital. However we found the linkedin profile of a man called Gilbert Anim Kwakye, who listed himself as an editor and Ghana Broadcasting Cooperation.

We also found a report on a website called thereporters.com.ng, that revealed that the said doctor worked at ICBS hospital in Chana, but doesn’t mention any country. Further research on the name of the doctor and the hospital in Chana did not yield any results, forcing us to conclude that there was no such individual.

Further Newschecker looked up the effects of Pineapple on cancer. We first found a study by a group of doctors in Taiwan which revealed that Bromelain, a group of enzymes found in the fruit and stem of the pineapple, inhibits the ability of “colorectal cancer cells (colon cancer)” to proliferate. “Several studies showed that bromelain can inhibit cell growth and induce cell apoptosis (death) in different cancers through different pathways,” the research paper reads.

However, a write up on the Memorial Sloan Kettering Cancer Centre says that there isn’t enough evidence to claim that Bromelain can significantly affect cancer in humans. “Bromelain is an enzyme that breaks down protein molecules and is obtained from pineapple stems. In lab experiments, bromelain prevented blood clotting and decreased inflammation. Studies in humans are limited. When used topically in clinical settings, it helps remove dead and damaged tissue from burns. Although bromelain is sometimes taken orally to help digestion and absorption, studies are lacking. It also has not been studied for effects on cancer in humans. Bromelain may increase the absorption of some antibiotics,” it reads.

Another report on AFP, quoting Professor Dr Aru Wisaksono Sudoyo, chairman of the Indonesian Cancer Foundation, reads “Like other fruits — including apples and avocados, among others — pineapples are healthy. They are fruits that can support general health and immunity. No more than that. While consuming pineapple and other healthy fruits and vegetables may help reduce the risk of cancer, it is important to note that they are not equivalent to medical treatments or therapies for the disease.”

“Pineapple as a fruit is a good addition to your diet, like apple of banana, but has no added advantage. It is not some magic cure for cancer as it is being pitched. It cannot be used as a cure for cancer. Eating it over a long time does not guarantee prevention of cancer either,” Dr Jojo said.

Speaking regarding the alleged ‘alkaline’ property of pineapple, Dr Jojo said, “Pineapple is an acidic fruit. The pineapple water would have a PH of 3-4 no matter how much one dilutes it. This never becomes alkaline.”

Pankaj Menon
Pankaj Menon is a fact-checker based out of Delhi who enjoys ‘digital sleuthing’ and calling out misinformation. He has completed his MA in International Relations from Madras University and has worked with organisations like NDTV, Times Now and Deccan Chronicle online in the past.
Facebook
Twitter
WhatsApp
Linkedin
Previous article
BJP’s T Raja Singh: A Rabble Rouser With A History Of Controversial Remarks
Next article
Edited Video Of Nitin Gadkari Saying He Has No Interest in Ministerial position Shared Out Of Context