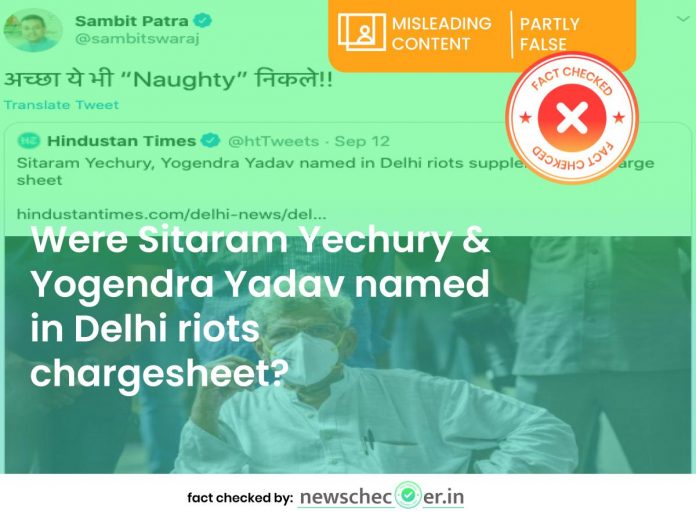 When translated, Patra’s tweet implies that Sitaram Yechury and Yogendra Yadav have been “naughty” since their names appear in the Delhi riots supplementary charge sheet.

Patra’s tweet garnered 44.4K likes and 8.8K retweets at the time of writing this fact check. His tweet has also been quoted over 300 times till now.

The claim on Yechury and Yadav’s name in Delhi riots supplementary charge sheet has been widely circulated on Twitter by many other users as well.

The riots in context refer to the north-east Delhi riots case in February 2020, which occurred post anti-CAA protests.

Through a relevant keyword search on Google, we came across other news organisations that shared the claim on Yechury and Yadav’s name in Delhi riots supplementary charge sheet.

News reports published by Navbharat Times, Jansatta, and ABP Live have stated that Sitaram Yechury, Yogendra Yadav, Jayati Ghosh, Apoorvanand, and Rahul Roy have been added as co-conspirators by the police in Delhi riots case from February 2020. It also suggests that a few of the said people asked protestors to go to any extent necessary in the anti-CAA protests.

India Today and Times Now also suggested that the politicians and academics identified in the statements were accused in the case.

However, the Delhi Police on September 13 refuted India Today’s article titled, “Delhi riots: Police name Yechury, Yogendra Yadav, Jayanti Ghosh, in supplementary chargesheet.” They clarified that Yechury, Yadav and Ghosh had not been arraigned as accused in the charge sheet.

Yadav in a tweet on 12 September also pointed out that a similar claim made by PTI news is factually incorrect. He said, “Supplementary chargesheet does NOT mention me as co-conspirator, or even as accused. One passing reference to me and Yechury, in an unauthenticated police statement (not admissible in court) by one accused.”

Later that night, Press Trust of India in a tweet quoted the police stating that names of the politicians and academics were part of a disclosure statement of an accused.

On 13 September, Times of India in its article titled, “Sitaram Yechury, Yogendra Yadav not charged in Delhi riots: Cops,” clarified the same.

You can read our Hindi fact check on this claim here.

Our research makes it clear that the claim made by a few media organisations on Sitaram Yechury and Yogendra Yadav named in Delhi riots supplementary charge sheet is misleading. Their names were not included in the chargesheet, but were part of a disclosure statement of one of the accused.