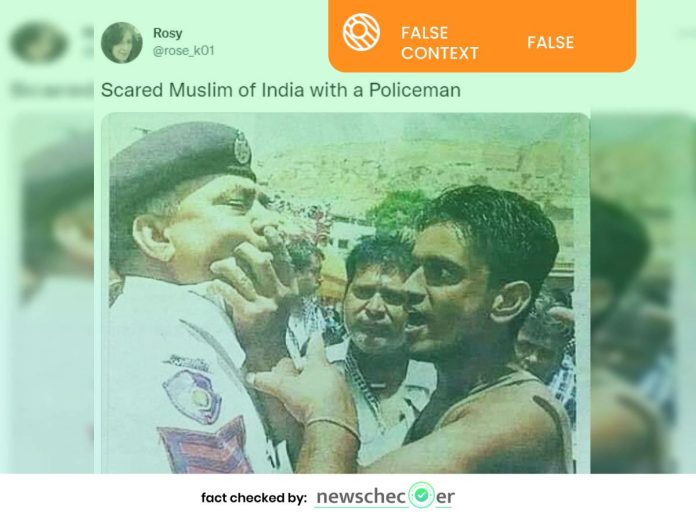 An image of a young holding a police officer by his collar with a menacing look on his face, is going viral on social media, with many users claiming that the man in question was a Muslim, disrupting an on duty policeman with impunity.

The image has been shared on Twitter by user @rose_k01 with the caption ‘Scared Muslim of India with a Policeman’, and has garnered 5,334 likes and 1,950 retweets.

The video is being shared amid reports of the clashes that erupted in Karauli, Rajasthan on 2nd April, 2022 after a Hindu New Year rally was met with stones while passing through a Muslim neighbourhood. Violence broke out in the area following the incident, with shops and vehicles set ablaze and vandalised. Social media has since been abuzz with misinformation and unsubstantiated claims surrounding the incident.

Also read: Viral Video Of ‘Hindu New Year Rally Being Stopped By Muslims’ Is An Old Video From Punjab

Newschecker conducted a Google reverse image search on the viral image to ascertain its authenticity and found the image of a newspaper clipping carrying the same image. The headline in the clipping read “Head Constable roughed up after he removed a hawker’s cart.” According to the report the image was shot when a head constable in Jodhpur was roughed up by a hawker after he tried to remove his cart in an anti-encroachment drive.

Upon further investigation, Newschecker found the incident was reported by a website called Lion Express on 28th May, 2016 which contained similar images to the viral image.

Upon conducting a keyword search, Newschecker found that the incident was reported by Dainik Bhaskar, uploaded on their website 6 years ago.

According to the report, the incident is from the Ghantaghar area in Jodhpur where some hawkers had encroached upon the area which was declared as “no jamming zone” by the Municipal Corporation.

The report also stated that the officer in the photo is Head constable Shobharam, who took action against the hawkers who surrounded him and two other policemen, and roughed them up.

Newschecker reached out to Jodhpur Police who got us in touch with HC Shobharam who is now the Assistant Sub-Inspector in the Traffic Police, Jodhpur.

Clarifying about the incident, ASI Shobharam said that “this incident is from 2016 from Jodhpur city where a few hawkers had encroached upon the road and were causing traffic jams, which is being given a communal spin now. The young man in the photo who roughed me up was not a Muslim, but a hawker, who was also Hindu.” He further added that the young man and others were arrested later for manhandling the police officers.

According to the investigation conducted by Newschecker, an old image from 2016 in Jodhpur where a Hindu hawker roughed up a police officer is being shared as a Muslim man.

Vaibhav Bhujang
Vaibhav is a part of Newschecker’s English team, where he spots and debunks all kinds of misinformation, making the rounds on the internet. A Journalism graduate from St. Xavier's College, Mumbai, he holds an M.A degree in Philosophy and an M.Phil from Delhi University.
Facebook
Twitter
WhatsApp
Linkedin
Previous article
No, This Video Does Not Show ‘Muslim Man Attacking Hindu Women’,  Old Video Revived With False Communal Spin
Next article
Video Of Men Waving Saffron Flags Outside A Mosque In Karnataka Linked To Karauli Violence