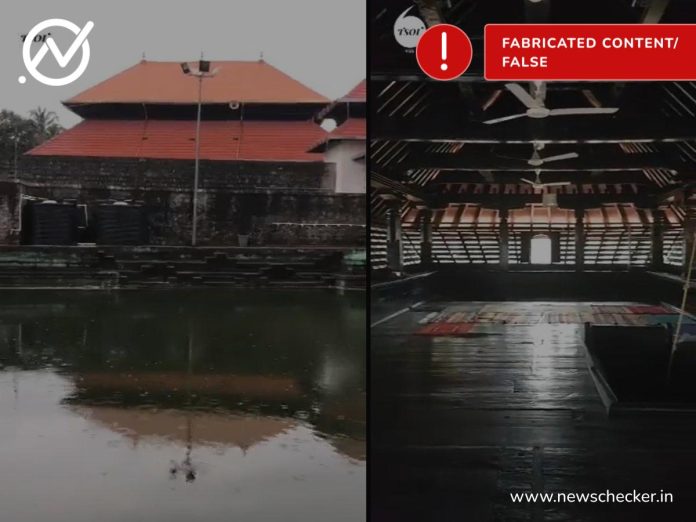 A video showing an old structure complete with an adjoining pond, built in the style of architecture typical to Kerala, is being shared widely on social media alleging that an ancient Hindu temple in the state has been converted into a mosque. Newschecker found that the claim, that Muslims converted ancient temple in Kerala to a mosque, is false.

The video was shared by many users with the claims in both Hindi and in English.

To verify the authenticity of the video, Newschecker began by analysing the video thoroughly and observed a watermark on the upper left corner of the frame that read ‘TSOI’, which flipped to ‘Thousand Shades Of India’. Newschecker conducted a reverse image search of the keyframes of the video with keywords ‘thousand stories of India’ which took us to the Instagram page of the media outlet.

On scanning the page, we found the viral video featured on the Instagram page on December 20, 2021. The caption revealed that it was the Zeenath Baksh Masjid, the oldest mosque in Karnataka and the third oldest mosque in the country. “A glimpse into the oldest mosque of Karnataka and the third oldest in India! Mangalore’s Bunder area houses one of India’s oldest Muslim communities, their origin dating back to almost 1,400 years. A testimony to their history, going back 14 centuries, is their ancient place of worship, Zeenat Baksh Masjid, renovated and renamed by Tipu Sultan in the 18th century. Serene, unique in its architectural style and profusely intricate in its woodworks, Zeenat Baksh is a calming oasis amidst the hustle and bustle of this southern port city,” the post read.

The about section of the page in YouTube reads “Thousand Shades of India – Inspiring India! India is a rainbow of infinite shades formed by it’s mosaic of cultures and syncretic heritage. Everyday a million stories are spun in different corners of the country! At Thousand Shades of India, we travel across the length and breadth of this ancient land in search of unsung heroes and their inspiring stories. At TSOI, we celebrate India’s diversity in life and livelihood, cultures and traditions, heritage and history, art and craft through our stories and documentaries!”

Newschecker also found a description of the mosque on the official website of Karnataka tourism, which read “Masjid Zeenath Baksh located in the Bunder area in Mangaluru and this mosque portrays the life stories of Prophet Mohamed. Believed to be established by Arab Muslim traders during 644 AD, this mosque surpasses all others mosques due to its pure Indian architecture style. It is probably the only mosque in Karnataka made entirely of wood. The main highlight of the mosque is the wooden inner sanctum consisting of 16 pillars made of teak.”

The page also reveals that it was renovated by Tipu Sultan in the 18th century and named it after his daughter.

Further research revealed that the mosque was built by Malik Ibn Deenar, the disciple of the prophet, who also built the oldest mosque in India, the Cheraman Perumal mosque in Kerala.

The claim that Muslims converted an ancient temple in Kerala to a mosque in the recent past is not true. The video shows the Zeenath Baksh mosque in Karnataka’s Mangalore.

Pankaj Menon
Pankaj Menon is a fact-checker based out of Delhi who enjoys ‘digital sleuthing’ and calling out misinformation. He has completed his MA in International Relations from Madras University and has worked with organisations like NDTV, Times Now and Deccan Chronicle online in the past.
Facebook
Twitter
WhatsApp
Linkedin
Previous article
Weekly Wrap: Misleading Claim On India’s Debt, False Video Of Suman Kalyanpur And More
Next article
Did MP Govt Set-Up Separate Liquor Shops For Women? No, Viral Newspaper Clipping From 2020