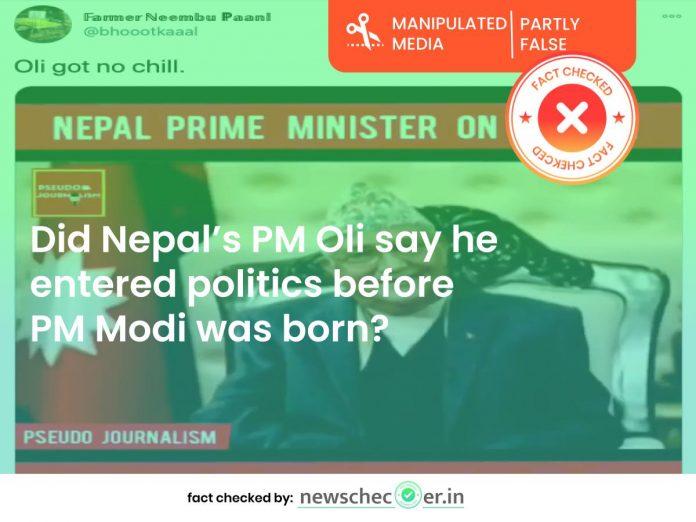 A video with a caption shared on Twitter claims that Nepal’s PM KP Sharma Oli in an interview with Zee News said that when he entered politics, PM Modi wasn’t even born.

The claim in context received 2.7K likes and over 800 retweets at the time of writing this fact-check.

This claim comes after Zee News editor Sudhir Chaudhary’s interview with Nepal’s PM KP Sharma Oli was aired earlier this month. During the interview, Chaudhary asked PM Oli a variety of questions pertaining to India and the relationship between the two countries.

This led to various claims shared on social media about the countries’ political relationship. In one such claim shared with a video, PM Oli can be heard comparing his age with PM Modi’s and saying when he entered politics, PM Modi wasn’t even born.

On the watching the above stated 45-minute interview by Zee News we found that the video clip in the claim is edited.

The actual conversation between Chaudhary and PM Oli on Zee News was as follows:

At the 6-minute 43-second mark in the video, Chaudhary asks PM Oli, “So now you’re refusing to consider India as a boss? The argument is on that.” To which PM Oli says that India doesn’t consider itself as a boss. He further says, “Yes, PM Modi is older than me in age. When two prime ministers sit together..it’s just two ministers sitting together, not a big or small minister…two sovereign countries’ prime ministers. Presidents and prime ministers of many countries are very young today…when I got into politics, some of them weren’t even born. They’re so young…but they’re still presidents. Be it of big or small nations. Their relationship with presidents of other nations’ will be of equal status…just the way different prime ministers will have an equal relationship.

You can see screenshots comparing the claim’s video (Left) and the original Zee News interview (Right) below.

This claim was earlier debunked in our Hindi fact-check.

Our research makes it clear that in the Zee News interview with Sudhir Chaudhary, Nepal’s PM KP Sharma Oli did not refer to PM Modi when he made the statement about being older than and entering politics even before PM Modi was born. In fact, his reference was to young presidents and prime ministers of other countries.