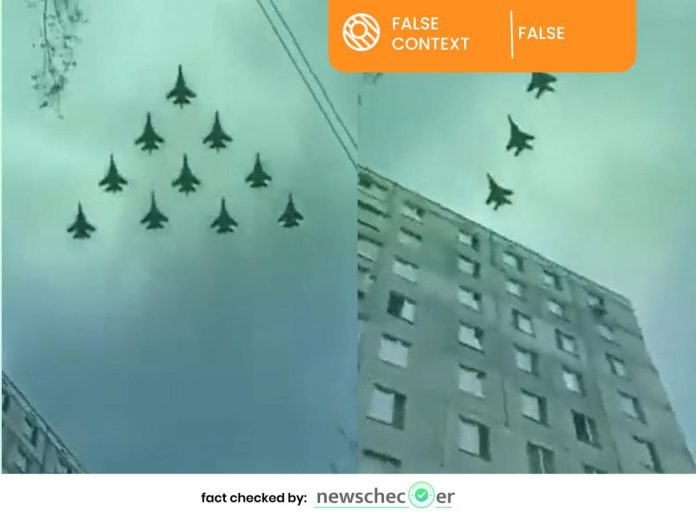 The Russia-Ukraine conflict escalated further late Wednesday night, with reports of explosions in the Ukrainian capital Kyiv and several other cities. Ukrainian airspace has been closed for civilian air traffic and the country’s foreign minister tweeted that it was facing a ‘full-scale invasion’, as Russia announced a military operation in the country. In light of this drastic turn of events, several social media users are sharing visuals of fighter jets flying low, above a residential area in what appears to be early morning light, claiming that the fighter planes belong to Russia. Newschecker has found the claim to be false.

Among the several users who shared the video claiming to show fighter jets flying over Ukraine was the handle @russiaattacks, with the caption ‘This morning in Ukraine’, which has been retweeted over 600 times. The video, which shows 10 aircrafts flying in a formation, has also received over 1000 likes. Several other users including Indian news channel Times Now posted the same video claiming to show Russian fighter jets flying over Ukraine.

An archived version of the tweet by Jan ki Baat can be seen here. It had over 2,000 likes and over 600 retweets.

To verify the authenticity of the claim that Russian fighter jets were flying over Ukraine, Newschecker analysed the comment section of the video to see several users pointing out that it was from an air show from 2020.

Newschecker split the video into several keyframes and conducted a reverse image search of the keyframes on Yandex, which threw up several results. One of the search results showed the same frame, apparently from a video of an airshow in 2020, posted on YouTube.

We followed the link to find the video posted on YouTube by an account that identifies itself as GoOn. The headline of the video, written in Russian reads, ‘Parade rehearsal 05/04/2020. Air Part. Flight of aircraft over Tushino’. The description reads ‘flight of aircraft over Tushino. Parade rehearsal May 9, 2020.’ The video was posted on May 4, 2020. It refers to the date of the parade as May 9 2020.

On analyzing the video, we found that it shows several aircrafts flying over a residential area, and at 3:19 minutes, it shows the exact frame of the 10 aircrafts flying in the same formation as seen in the viral video.

On looking up further, we found that Tushino is a town northwest of Moscow. We also found a report by the Moscow Times published on May 5, 2002, that said that Military planes conducted a rehearsal for the Victory Day Parade on May 9, that commemorates the Russian victory over the Nazis during WWII. This corroborates with the date of the parade written on the YouTube video. The article also refers to the day of the rehearsal as Monday, which is May 4 2020, confirming that the video is from an air show rehearsal.

This proves that the video does not show the Russian aircrafts flying over Ukraine, but is in fact from an air show in 2020, which happened in Russia. The audio of air raids has been superimposed on the footage of the air show rehearsals.

The video, that allegedly shows Russian fighter jets flying over Kiev, is actually from an airshow in Russia in 2020 and has been edited with the sound of air sirens to give it credibility.

Pankaj Menon
Pankaj Menon is a fact-checker based out of Delhi who enjoys ‘digital sleuthing’ and calling out misinformation. He has completed his MA in International Relations from Madras University and has worked with organisations like NDTV, Times Now and Deccan Chronicle online in the past.
Facebook
Twitter
WhatsApp
Linkedin
Previous article
Bihar JDU Worker’s Murder: Victim’s Family Says ‘Video Made To Give Communal Colour To Khaleel Rizvi’s Death’
Next article
Old Video From China Passed Off As Explosions In Ukraine After Russian Air Strikes