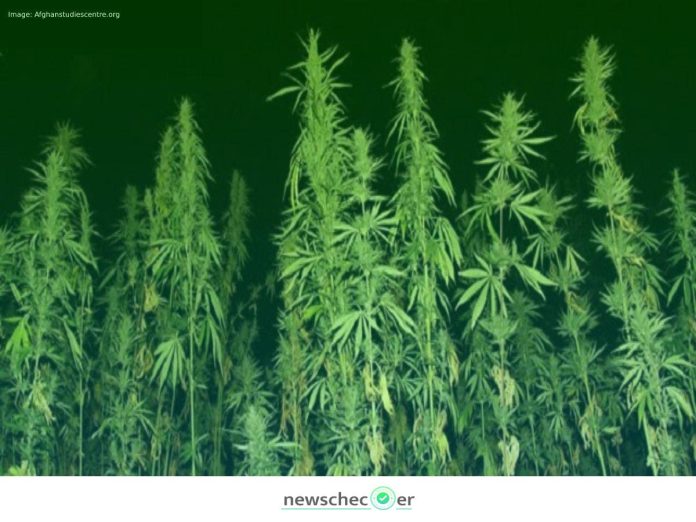 A day after Afghanistan Interior Ministry took to twitter to announced a $450 mn investment by an Australian company Cpharm to set up a hashish (Cannabis) processing unit in the Taliban ruled country, the company at the centre of the news has called out the claim as false, and clarified that they have no connection with Taliban or Afghanistan. But there is more to it than mere false claim by the Afghan Interior Ministry.

Several international media including BBC and Al Arabiya reported that the Afghanistan government was teaming up with an Australian company Cpharm.

The reports emerged after tweet by the Afghan Interior Ministry Spokesperson Saeed Khosty.

In his the tweets, Khosty claims that Cpharm would cultivate cannabis on in “30 acres of land and would invest $ 450 million in this sector. It is worth mentioning that all stages of the contract with the mentioned company have been completed and this project will officially start in the coming days.”

A tweet thread from the handle of the Interior ministry of Afghanistan also referred to the same ‘deal’. “Medicines and creams would be manufactured by the hashish-processing factory. The project will be officially launched soon and hundreds of people will get job opportunities on the project,” the ministry said.

But curiously, neither Khosty nor the Afghan MOI handle claimed that the company is from Australia. The claim seems to have originated from a Pajhwok News report, which linked the ‘Cpharm company’ in the tweets to the Australian company Cpharm.

Soon enough, the Australian company, in a statement to Reuters, clarified that the news was not true and that they were not associated with the developments.

Taking note of the various reports in international press and the Taliban’s tweets, the Australian company Cpharm also issued a statement denying the claim in their website.

The Australian company Cpharm, which calls itself a ‘boutique company’ on its  website, said in a statement, “We DO NOT manufacture or supply anything. We provide a medical advice service to the pharmaceutical industry within Australia. We have no products on the ARTG. We have no connection with cannabis or the Taliban. We have no idea where the Taliban media release has come from and want to assure everyone that it should not be connected to Cpharm Pty Ltd Australia.”

Newschecker reached out to Pahjhwok News to enquire the source of the claim that the company was Australian. Ahmad Shah Erfanyar, whose name is featured on the article, responded, “The story was written in our native language Pashto, and in Pashto, the company was a German firm, not Australian. The error occured during translation from Pashto to English. The company is German and not Australian.”

Pankaj Menon
Pankaj Menon is a fact-checker based out of Delhi who enjoys ‘digital sleuthing’ and calling out misinformation. He has completed his MA in International Relations from Madras University and has worked with organisations like NDTV, Times Now and Deccan Chronicle online in the past.
Facebook
Twitter
WhatsApp
Linkedin
Previous articleFact Check: Rowan Atkinson A.K.A Mr. Bean Is Not Dead
Next articleOld Video From Mexico Shared As Cattle Washed Away In Flood-Hit Tirupati