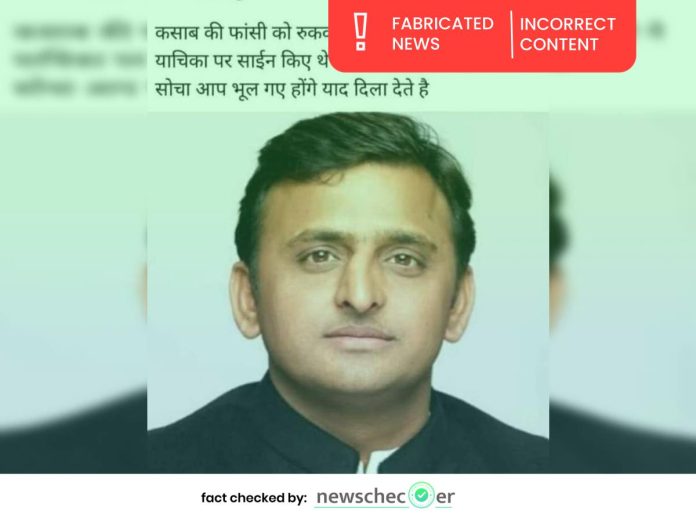 A viral post claiming that Akhilesh Yadav was among of the list of 203 people who signed the petition for the commutation of Ajmal Kasab’s death sentence, who was sentenced to death for the 26/11 terror attacks in Mumbai in 2008, is being widely shared on social media.

The claim was shared by Yogi Devnath who is in-charge of Hindu Yuva Vahini of Gujarat State,on Twitter. Yogi Devnath has 1.3 million followers on Twitter. Newschecker team found this tweet had around 2200 retweets and 5000 likes.

The archived version of this tweet can be found here.

A Facebook post with the same claim was shared in a group which garnered 2100 likes and 564 shares.

The 13th Anniversary of the 26/11 terrorist attack in Mumbai was mourned this year. The attack claimed as many as 72 lives including several policemen, one of whom were the Mumbai Anti-Terrorist Squad Chief, Hemant Karkare. Ajmal Kasab, a member of the the Lashkar-e-Taiba, was the only terrorist caught alive by the police.

Akhilesh Yadav is the national president of Samajwadi Party and served as the Chief Minister of Uttar Pradesh from 2012 to 2016. With the UP elections around the corner, many similar claims are making their way to social media and going viral. Samajwadi Party is vying for the opportunity to regain power in the state and has a fair chance of beating the ruling BJP.

A keyword search on the claim with the keywords ‘akhilesh’, ‘yadav’, ‘kasab’ ‘petition’ led the Newschecker team to an article published by the Indian Express on 21st November, 2012. According to the article, more than 203 people signed a petition which sought to pardon Ajmal Kasab’s death sentence.

This petition was sent to then president Pranab Mukherjee who rejected the clemency petition. The article mentions prominent voices such as United Nations, senior lawyer Collin Gonsalves, writers Mahasveta Devi and Naresh Fernandes and actors Nandita Das and Aamir Bashir etc. as the signatories of the petition.

We also contacted the Samajwadi Party Spokesperson, Sunil Yadav for confirmation and he commented saying “Bharatiya Janata Party only misleads and conspires to spread hatred. They don’t have anything to talk about development, so sometimes they start talking about temples and sometimes on Pakistan. Akhilesh Yadav ji has not signed any such mercy petition seeking commutation of Ajmal Kasab’s death sentence.”

According to our investigation, Akhilesh Yadav was not among the list of 203 people who signed the petition for commutation of Ajmal Kasab’s death sentence. The claim is false.

Vaibhav Bhujang
Vaibhav is a part of Newschecker’s English team, where he spots and debunks all kinds of misinformation, making the rounds on the internet. A Journalism graduate from St. Xavier's College, Mumbai, he holds an M.A degree in Philosophy and an M.Phil from Delhi University.
Facebook
Twitter
WhatsApp
Linkedin
Previous articleFire Accident In Nagaland Falsely Linked To Clashes Between Locals And Army
Next articleWeekly Wrap: From Old Videos Linked To General Bipin Rawat’s death To Nagaland Killings And More