Smriti Irani referred to Durga Puja as a most controversial & racist occasion in the parliament.

A Twitter account shared a video of Smriti Irani which went viral all over social media. Ali Sohrab with a handle @काकावाणी claimed that Union Minister Smriti Irani addressed Durga Puja as a racist festival.

This video is doing rounds on Facebook as well

This video is a fragment of a speech, so we tried to find the original speech given by Smriti Irani in the Parliament. With the help of keywords we found the original video on BJP’s official YouTube channel, the video was uploaded in 2016.

After listening to the whole video it was clear that a clipping of the original video is being shared on social media to mislead people. In her speech Smriti Irani did not say anything offensive about Durga Puja rather she was quoting a poster having a statement by the SC, ST and minority students of JNU. Here you can read the whole speech of Smriti Irani. 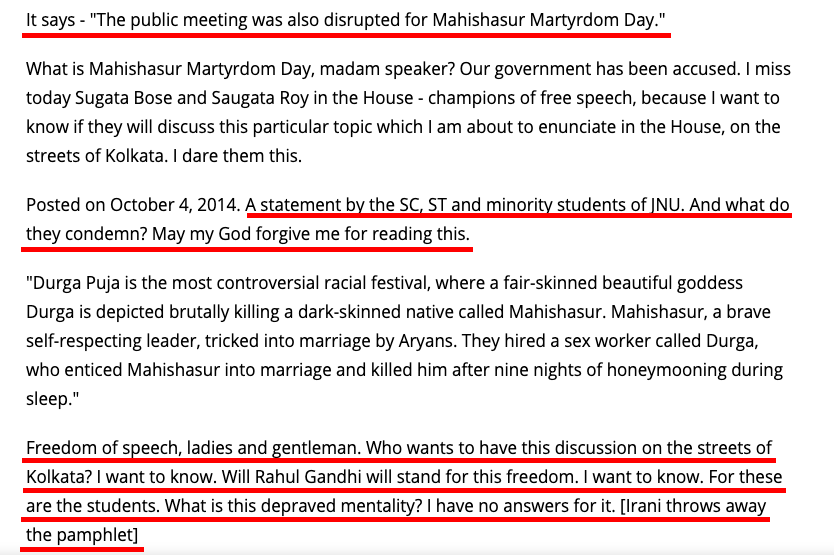 Newschecker Team
Facebook
Twitter
WhatsApp
Linkedin
Previous article3 Years Old Video Of Protest Against CPEC In Pakistan Is Being Shared As Of Recent
Next articleNo, You Will Not Get A Challan For Driving In A Half Sleeves Shirt/T-shirt