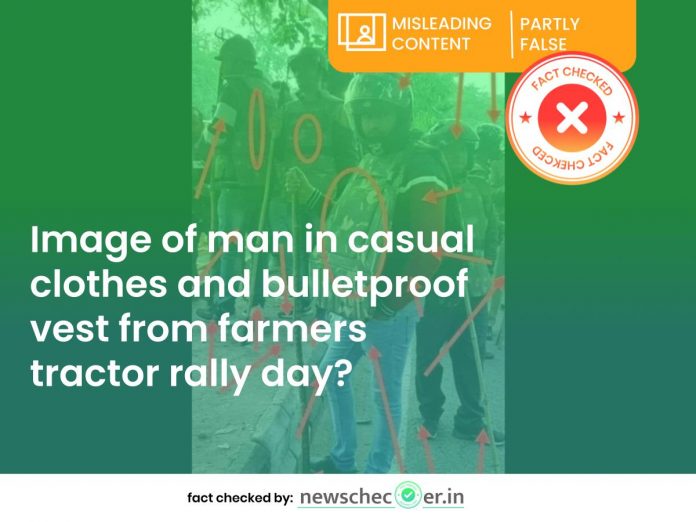 An image of a man in casual clothes wearing a bulletproof vest and helmet is being shared with misleading claims after the 26 January violence that erupted in the national capital during the farmers tractor rally.

On Republic Day, the police and protesting farmers clashed after tractors deviated from the designated rally route.

When translated from Punjabi to English, it (roughly) reads, “Jeans pants new uniform Police of which state? Provide information. Share and promote uniforms”

Another claim shared with this image when translated reads, “Which state’s police uniform is this blue jean and t-shirt? What kind of politics is this, sir? Share it as much as you can”

The virality of the claim on Facebook can be viewed here.

During anti-CAA protests in December 2019, the same image (without the red markings) was shared with a false claim that an Akhil Bharatiya Vidyarthi Parishad (ABVP) member, namely Bharat Sharma, was involved in beating student protesters from Delhi’s Jamia Millia Islamia University.

An example of the claim shared in December 2019 can be seen below.

Newschecker had debunked this claim earlier.

The man seen in the viral photo is in fact, Arvind Kumar, an employee of the Delhi Police Anti-Theft Squad.

In December 2019, Delhi police clarified that the man is not an not ABVP member, but a cop in civilian clothes who had been posted in New Friends Colony during the Jamia violence.

In another tweet, Delhi police clarified that “there is no connection between alleged profile of a person in pic below and the plainclothes constable of #SouthEastDistrict deployed on duty in law & order bandobast in available anti-riot gear.”

At the time, ABVP also issued a clarification via Twitter.

Our research makes it clear that the claim attributed with the image of a man wearing casual clothes and a bulletproof jacket is misleading and out of context. It’s an old image and the man in it is in fact a Delhi Police employee.