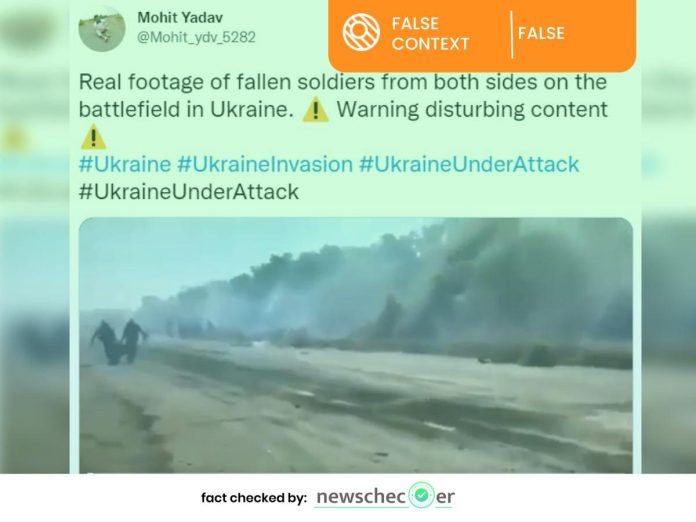 As Russia started bombing the the Ukrainian capital on Friday, 25th February, social media has been overwhelmed with unsubstantiated claims and conjecture about what is happening in the region. In light of these events a video has been going viral on social media claiming to show a footage of ‘Real footage of fallen soldiers from both Ukraine and Russia’.

This video has been shared on Twitter by the Twitter account @Mohit_ydv_5282 which has gone viral and garnered around 1,15,000 views with over 382 likes and 114 retweets with the caption ‘Real footage of fallen soldiers from both sides on the battlefield in Ukraine. ⚠️ Warning disturbing content’

Newschecker advises viewer discretion before viewing the video as it is graphic in nature.

Overnight the city of Kyiv was hit with multiple blasts as Russian troops moved further into Ukrainian territory attacking from the East, North and South. The European Union has responded by imposing sanctions on Russian assets in Europe and United States to freeze any kind of western funding Russia has on its books. Aerial attacks have been conducted in the city of Kiev which have led many civilians to flee their homes and take refuge in metro stations. Many soldiers on both sides have been reportedly killed in the war.

To verify the authenticity of the video, Newschecker conducted a reverse image search of the key-frames of the video on Google and found a clip from Instagram which was uploaded on 23 April, 2018 by Instagram user misha.konnov.

Using the year as a clue, upon performing a keyword search Newschecker found a news article from Turkish News media company Akit uploaded on 20th April 2018. The images in the article match with the images used in the viral video.

According to the article, the images are from Russian Mercenary group Wagner killed in a US airstrike in February near the Syrian city of Deir ez-Zor. The article states “Russian Wagner mercenaries are shown as the largest paramilitary structure in the world against the BlackWater group of US mercenaries.”

The Wagner group works to protect Russian interests internationally such as protecting oil wells and other resources abroad. The Wagner group is not officially recognised by the Russian government as Russia does not allow mercenary groups to be a part of their military forces officially.

We found the images in the news article match with the viral video but we don’t know if the video dates back further.

According to the investigation conducted by the Newschecker team, it was found that the viral video of fallen soldiers of both Russian and American military is an old clipping shared out of context.

Vaibhav Bhujang
Vaibhav is a part of Newschecker’s English team, where he spots and debunks all kinds of misinformation, making the rounds on the internet. A Journalism graduate from St. Xavier's College, Mumbai, he holds an M.A degree in Philosophy and an M.Phil from Delhi University.
Facebook
Twitter
WhatsApp
Linkedin
Previous article
Photo Of Young Couple Draped In Ukrainian & Russian Flags Shared With Poignant Caption Is OLD
Next article
No, This Video Doesn’t Show Russia’s Recent Attack On Ukraine