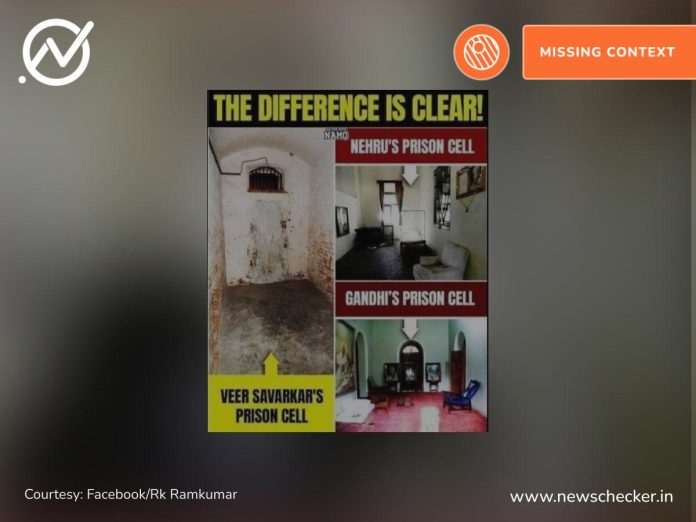 Several social media posts comparing the prison cells of VD Savarkar, Jawaharlal Nehru and Mahatma Gandhi during the freedom struggle are doing the rounds. A Facebook post, titled the “Difference is clear”, pointed out preferential treatment for Nehru and Gandhi, especially with the furniture visible in the prison cells of the latter two. On Twitter, one user shared a collage of the three photos and said, “No.1 is the cell where Savarkar was imprisoned as compared to the other two cells where Nehru & Gandhi were imprisoned which are made into memorials. Probably Nehru wrote the book “Discovery of India” while imprisoned here. Anybody’s guess who suffered most during imprisonment.”

Newschecker conducted a reverse image search on each picture. We first looked up the first image which allegedly shows Savarkar’s jail cell with keywords “Savarkar jail”. We came across several results, all pointing to the Cellular jail in Andaman and the Nicobar Islands. They can be seen here, here and here.

In 1911, Savarkar was reportedly sentenced to 50 years (two life terms) in the cellular jail of Andamans (also known as Kala Pani) for revolting against the Morley-Minto reforms (Indian Councils Act 1909). He was released in 1924.

We then moved on to the image purportedly showing Nehru’s jail cell.

While we could not find an exact match, we came across Twitter comments and news reports, pointing out that the image showed Nehru’s jail cell at Ahmednagar fort. Taking a cue from this, we did a keyword search for the term, “Nehru jail Ahmednagar fort”.

According to this official record, “This structure [Ahmednagar fort] holds a special place in the memory of the freedom struggle as a place where important freedom fighters such as, Pandit Jawaharlal Nehru, Maulana Abul Kalam Azad, Sardar Vallabhai Patel, Pandit Govind Vallabh Pant and Acharya Narendra Deva, were imprisoned. These important leaders of our freedom movement were arrested on the eve of the Quit India Movement in 1942, which shook the foundations of the British Empire in India… Jawaharlal Nehru was confined to the fort for nearly three years during which time he was cut off from active politics.” The image featured in the website was the same as the image seen in the viral image. The title of the image read “Leaders Block at Ahmednagar Fort where the freedom fighters were jailed”.

Newschecker then looked up the image said to be of Gandhi’s jail cell which led us to the webpage of Wikimedia commons and Maharashtra Tourism, which indicated that it showed the Aga Khan Palace in Pune where Gandhi was detained.

“In 1942, Mahatma Gandhi was under ‘house arrest’ for 21 months in Aga Khan Palace, which has become a monument of national importance. But the palace was more than just a prison for Gandhi,” an Indian Express report detailed.

While photos in the posts are accurate, the comparison is not, considering the timeline of Savarkar’s arrest was different from Nehru and Gandhi’s. Also, Savarkar was sent to Cellular jail after being tried and was serving life sentences, while Nehru and Gandhi were being held, or rather, detained by the British in an attempt to weaken the Quit India movement. However, Nehru and Gandhi had served prison sentences in other jails. Nehru was imprisoned nine times, including terms at Lucknow District Jail and Almora jail, while Gandhi was jailed 11 times, including three stints at Yerawada prison.

Photographs of prison cells linked to Nehru, Gandhi and Savarkar, although accurate, cannot be compared. The image in Savarkar’s case was of his life term at Cellular Jail, while the other photos were of Nehru and Gandhi’s detention, 30 years later, during the Quit India Movement.