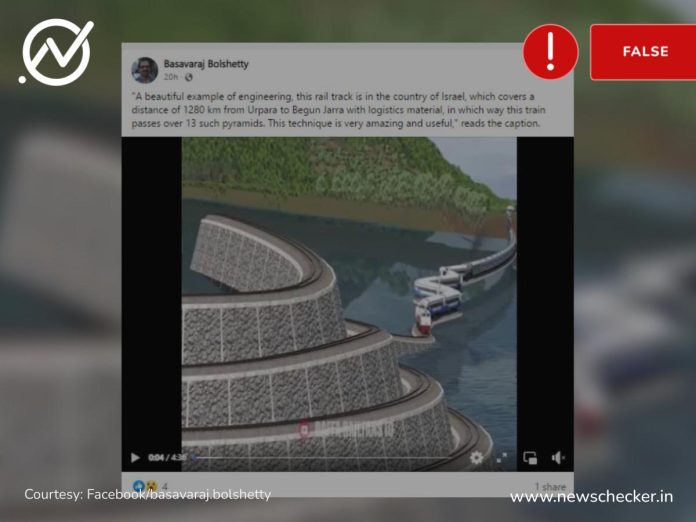 A video showing a train going up a pyramid-like railway bridge is going viral on social media, with the users claiming that the video is from Israel, and that the ‘engineering marvel’ covers 1280kms,  from Urpara to Begun Jarra. Newschecker found these claims to be untrue.

Facebook user Basavaraj Bolshetty was among those who shared the video with the caption ‘A beautiful example of engineering, this rail track is in the country of Israel, which covers a distance of 1280 km from Urpara to Begun Jarra with logistics material, in which way this train passes over 13 such pyramids. This technique is very amazing and useful.’

Upon analysing the video we noticed a watermark that read ‘Daffa Railfans ID’ on the bottom of the video. It also carried the logo of a YouTube channel on the video.

Using this as a clue, we conducted a keyword search on Youtube with the words “Daffa Railfans ID” and found a Youtube channel by the same name and logo.

Upon going through the contents of the channel we found the video which is going viral now uploaded on Youtube titled ‘Kereta Api Mendaki Piramid | Pyramid Climbing Train part 10’ on 29th November, 2021.

According to the About section, “Daffa Railfans ID is a train channel that is in the 2019 train simulator game”.

On further analysis of the channel, Newschecker was able to find that the viral footage was a gaming footage from the simulator game ‘Trainz Railroad Simulator 2019’.

Steam, a video game digital distribution service and storefront describes the video game as “Much more than just a train driving simulator,”  and it helps you “Build , drive and operate the railroad of your dreams”.

Newschecker’s investigation has revealed that a gaming footage from ‘Trainz Railroad Simulator 2019’ is being passed off as an engineering marvel of the railway system in Israel.

Vaibhav Bhujang
Vaibhav is a part of Newschecker’s English team, where he spots and debunks all kinds of misinformation, making the rounds on the internet. A Journalism graduate from St. Xavier's College, Mumbai, he holds an M.A degree in Philosophy and an M.Phil from Delhi University.
Facebook
Twitter
WhatsApp
Linkedin
Previous article
No, ‘Muslims’ Did Not Admit In Court That Halal Means Spitting In Food, Viral Claim Is False
Next article
Did Times Now Report Show Rahul Gandhi Having A Massive Edge Over Other National Leaders? Viral Image Is Manipulated