Claim: A Twitter user shared an image that shows a mob wearing saffron scarfs and carrying a sword, cornering a man.

The caption reads, ‘the RSS are terrorists. They’ve always been so. Now they control the Government in India’. 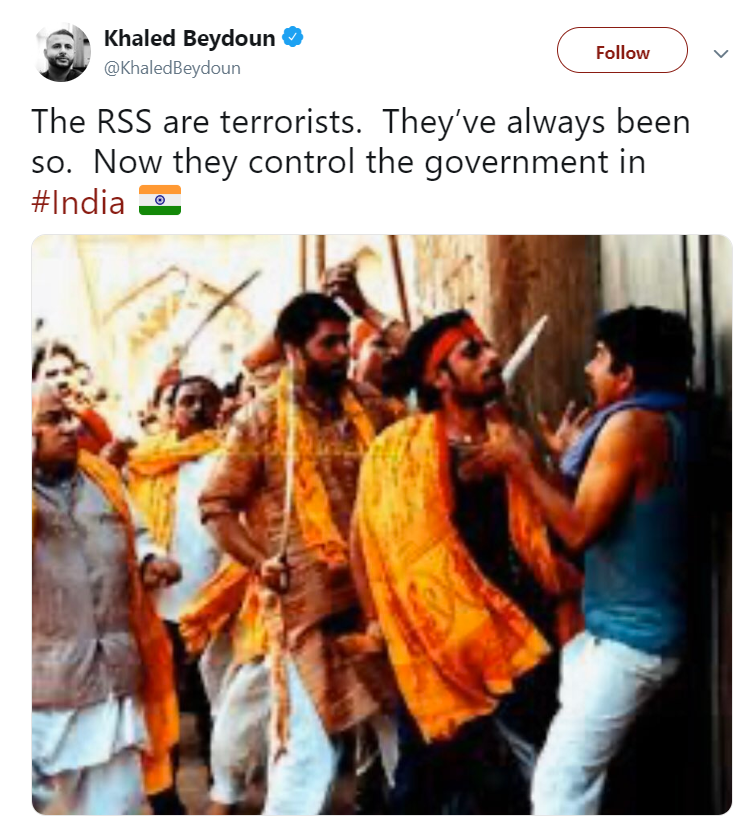 A picture is doing rounds on social media, which shows a mob wearing saffron scarfs and carrying swords, cornering a man.

We found that several blue tick Twitter handles shared the viral picture on their respective handles, with the captions taking a dig at Rashtriya Swayamsevak Sangh (RSS). Khaled Beydoun Tweet reads, ‘The RSS are terrorists. They’ve always been so. Now they control the government in India’. However, he deleted his Tweet later on. Here is a screenshot of the Tweet. Using reverse-image search on the Google search engine, we found a postdated article in Business World , which carried out the same viral image. The caption of the image reads, ‘A screengrab from Parzania inspired by the true story of a little Parsi boy that went missing during the Gulbarga society massacre in Ahmedabad in 2002’. With the help of relevant keywords search, we found the video of Movie Parzania on ‘YouTube.’ We analyzed the video and found the same actor seen in the viral photo. Here is a screenshot from the movie.

Reverse Image search led us to another news website ‘New York Times,’ which carried out the same viral image but from a different angle. The article was published in 2007.The caption of the image reads, ‘A scene from “Parzania,” one of the films playing in the “India Now” festival at the Museum of Modern Art.’

Parzania is a 2007 Indian drama film which featured Naseeruddin Shah and Sarika in the lead roles, while Corin Nemec and Raj Zutshi played supporting roles. The film is inspired by the true story of a ten-year-old Parsi boy, Azhar Mody who disappeared after the 28 February 2002 Gulbarg Society massacre during which 69 people were killed and which was one of many events during the communal riots in Gujarat in 2002.

It is evident from our fact check that a scene from Indian Drama Film ‘Parzania’ has been shared on Social Media , with captions taking a dig at Rashtriya Swayamsevak Sangh (RSS).

Facebook
Twitter
WhatsApp
Linkedin
Previous articleCOVID-19 Patients Are Not Being Segregated On The Basis Of Religion; Media Outlets Falsely Report
Next articlePhotograph Taken in 1985 Shared on Social Media in the Backdrop of COVID-19 Pandemic