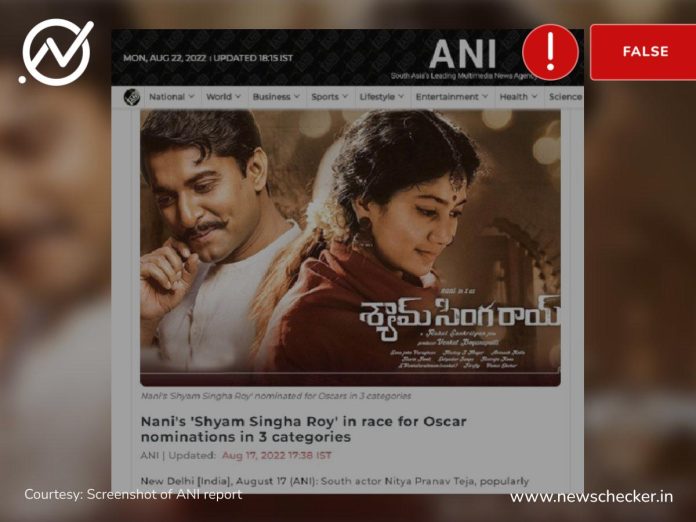 Shyam Singha Roy, the 2021 Telugu period-romance film, is back in the news months after its spectacular performance, with reports that the movie will compete for Oscar nominations in three categories —  “periodic film”, “background score” and “classical cultural dance indie film”.  Several Indian news outlets, including NDTV, The Print, Outlook published the news on their website, quoting an ANI report. Several social media posts, many of them from verified Twitter handles, congratulated the cast and crew of the movie and hailed the film’s purported achievement.

Republic World, The Tribune, DNA, DTNext,  Mid-Day, too were among other media houses that published the report.

Several Twitter users claimed that the film has already been sent for Oscar nominations.

According to the ANI report, “South actor Nitya Pranav Teja, popularly known as Nani, and Sai Pallavi’s film ‘Shyam Singha Roy’, is in the running for Oscar nominations in three different categories. ‘Shyam Singha Roy’ will compete for Oscar nominations in three categories – ‘periodic film’, ‘background score’ and ‘classical cultural dance Indie film’. The songs and background score for the movie were provided by Mickey J Meyer. The movie  was a blockbuster, despite testing conditions due to Covid-19. The film is an intense period drama set in Kolkata in the 1970s.”

Meanwhile, the Academy of Motion Picture Arts and Sciences had earlier in the year announced that the 95th Oscars will take place on Sunday, March 12, 2023.

Newschecker first did a keyword search for “Oscars periodic film”, “Oscars background score”, “Oscars classical cultural dance indie film”, and “Oscars Shyam Singha Roy”. Barring news reports claiming that Shyam Singha Roy is being sent for Oscar nominations, we found no articles associating the Oscars with any of the three categories, nor did we find  earlier instances of films being nominated under such categories.

We then got in contact with the Academy of Motion Picture Arts and Sciences via email, enquiring if there were such categories and whether Shyam Singha Roy’s nomination race was valid. Michael Benedict, Senior Manager, Member Relations and Awards, said, “We do not publicly confirm eligibility of titles until the end of the year or beginning of next year.  We do not have categories for ‘periodic film’, ‘background score’ and ‘classical cultural dance Indie film’.”

Benedict then guided us to the rules and regulations of the awards, which listed out all the eligible categories. According to the official document stating the rules of the 95th Academy Awards, the three categories — ‘periodic film’, ‘background score’ and ‘classical cultural dance Indie film — do not exist.

Newschecker then spoke to Uma Vangal, film-maker and Fulbright Research Scholar, Kenyon College, Ohio, who said, “To my knowledge, those are categories restricted to films made in the US. The only categories that an Indian film can be nominated for are “Best International Feature” or “Best Foreign Film”.  The race for nomination could refer to the Indian selection for a film to be nominated and these might be criteria for selection by the National committee for Oscar recommendations. That is my reading of this information.”

In India, the Film Federation of India (FFI) is authorised to select one film for Oscars consideration in the category “International Feature Film Award” (formerly called ‘Best Foreign Language Film Award’). On scanning the organisation’s website, we did not find any mention of Shyam Singha Roy and its alleged nomination. There also has not been an official communication on the matter from the FFI. We reached out to them, regarding the validity of the claim. We did not get a response at the time of publishing this article. We will update this report once a response is received.

Ram Venkat Srikar, who writes for Cinema Express, had on Twitter shared a screenshot of the NDTV article and said, ”This is not true. Several publications and journalists have been sharing that #ShyamSinghaRoy is in line for #Oscars in three categories. IT IS A FALSE NEWS. There are no such categories. Sad to see reputed media houses publishing this without checking the facts.”

“The government will announce the list of shortlisted films before announcing the pick for the submission. That’s how it works. And FYI, I checked with a source from the team and they called this development “untrue”, he added.

Cinema Express also dismissed the claims in an article, stating, “There is no truth in these reports [Shyam Singha Roy’s nomination news]. While the origin of the news is unclear, there is no official source to back corroborate these claims. Likewise, the Oscars awards do not award the categories mentioned above. Speaking to Cinema Express, a source close to the film also denied these claims and expressed surprise at the reports.”

News reports and social media posts claiming Telugu film Shyam Singha Roy was in the running for Oscar nominations for “periodic film”, “background score” and “classical cultural dance indie film” were found to be wrong. No such categories  for nomination exist, and there has been no official word on the nomination from India yet.

Email with the Academy of Motion Picture Arts and Sciences