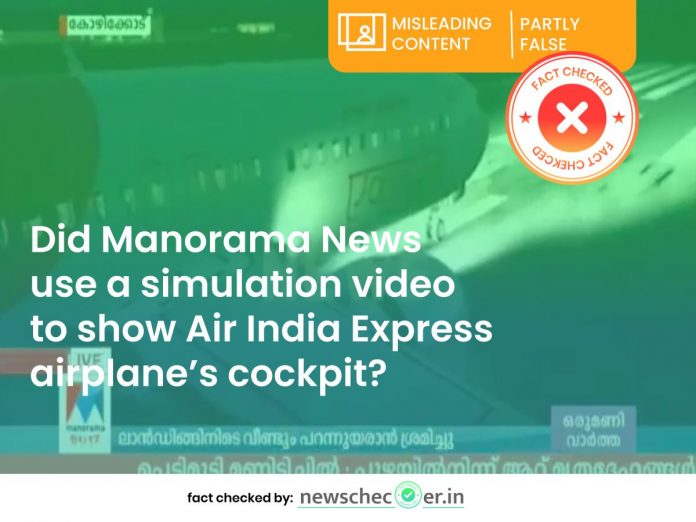 A Twitter user seeks clarification on a video used to show the cockpit of Kozhikode’s plane crash on 7 August. The video in context was published by Manorama News following the Air India Express plane crash in Kozhikode.

A news channel from Kerala @manoramanews  says this is the cockpit video of the flight #KozhikodePlaneCrash.

Kindly clarify , is this original video,

This video is heavily circulated in whatsapp.”

Among comments of the above claim, another user tweeted a Youtube link to a simulation video which was created by Prepar3D software. On Youtube, the video was posted on 7 August by an account named MPC Flight Recreations. Gaining over 96,000 views, the video’s description is as follows:

“Music used: Flying high over the sky – MPC. This is a video simulation with real data of Air India Express flight 1344, a Boeing 737 registration VT-AXH from Dubai to Calicut Airport, on august 7, 2020. The plane overshot runway 10 and ended up at the bottom of a cliff.”

The clip published by Manorama News can be seen from 3:02 minutes in the Youtube video linked below.

We then reached out to Manorama News for clarification on the said video published by them. Their response to us can be read below:

“We had collected various visuals/simulations as models and filed them for reference. On the 10th of August, we got a still from the cockpit of the ill-fated plane. The news was based on this still. The news also clearly has details about the still like the position of the thrust lever, flap, the engine still functioning etc. We only intended to give details in the news based on this still. But inadvertently a visual which was stored for reference was used in the story. The oversight was immediately noted by our own team after the story went on air and it was withdrawn. Also, a fresh story was aired from the next bulletin. A link to the news story aired is attached for reference.”

Manorama News admitted to an oversight by publishing a simulation video of the Air India Express air plane’s cockpit as a real one. They’ve now published a revised story with corrections.