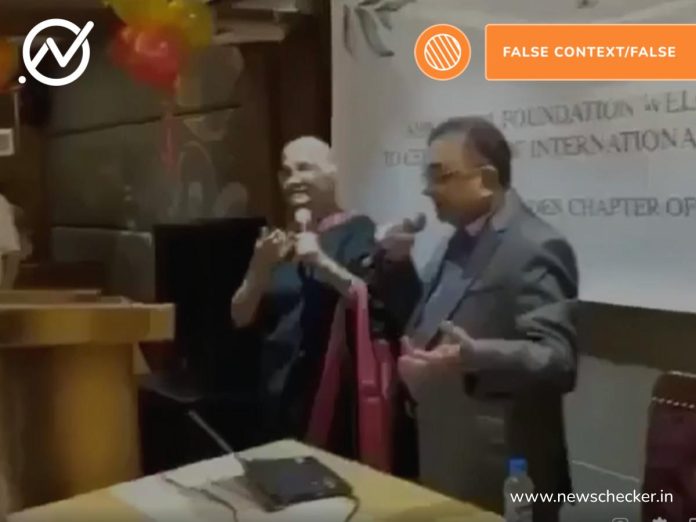 A video of an elderly woman singing in a pristine voice is going viral on social media, claiming to show  famous yesteryear playback singer Suman Kalyanpur at the age of 84. In the video an elderly woman along with an elderly gentleman can be seen singing a duet song which was originally performed by Lata Mangeshkar and Hemant Kumar for the film Patita, released in 1953.

The video has been shared on Facebook by user Rakesh Sharma along with the caption ‘Suman Kalyanpur singing the song at the age of 84’.

Suman Kalyanpur has sung songs like Aaj Kal Tere Mere Pyaar Ke Charche and Naa Naa Karte Pyar Tumhin Se Kar Baithe among others.Suman Kalyanpur’s career started in 1954 and was very popular singer in the 1960s and 1970s. She recorded songs for movies in several languages besides Hindi, Marathi, Assamese among others, and was also awarded the “Sur Sringar Samsad” award for the best classical song in a Hindi movie 3 times. After the demise of famous singer Lata Mangeshkar on 6th February, 2022, Suman Kalyanpur gave an interview saying her voice was similar to that of Lata Mangeshkar but a connoisseur could tell them apart.

Also read: Is India’s Total Debt As A Percentage Of GDP In Line With That Of Sri Lanka? Viral Claim Is Misleading

Newschecker conducted a Google reverse image search on the keyframes of the video to ascertain its authenticity and found a video which matched some of the images in the viral video, uploaded by the Facebook page of AmbaGopal Foundation on 2nd October, 2021.

According to their website, the event where this song was performed was from the International Day for Elderly People in 2018. The website contained several images of the woman in question.

Newschecker conducted a Google reverse image search on the images and found an article by Times of India uploaded on 4th May, 2020. According to the article, the woman is identified as Aruna Prakash, a 78 year old widow who lives in Juhu and is also one of the volunteers who talks to doctors who treat Covid affected patients in a new helpline which aims to help doctors and the elderly.

Newschecker found that image in the article matches with the one in the viral video.

Newschecker also reached out to AmbaGopal Foundation who confirmed that this video is the Elderly Day event. They also added that the woman was lip-syncing over the popular song and not really singing as mentioned in the viral claim.

According to the investigation performed by Newschecker, a video of a certain Aruna Prakash lip-syncing over a popular song is being passed off as Suman Kalyanpur at the age of 84.

Vaibhav Bhujang
Vaibhav is a part of Newschecker’s English team, where he spots and debunks all kinds of misinformation, making the rounds on the internet. A Journalism graduate from St. Xavier's College, Mumbai, he holds an M.A degree in Philosophy and an M.Phil from Delhi University.
Facebook
Twitter
WhatsApp
Linkedin
Previous article
This Video Does Not Show Kerala Police Officers Dancing To Kacha Badaam
Next article
Social Media Post Of Community Wise Tally Of ‘Freedom Fighters Inscribed On The India Gate’ Is False