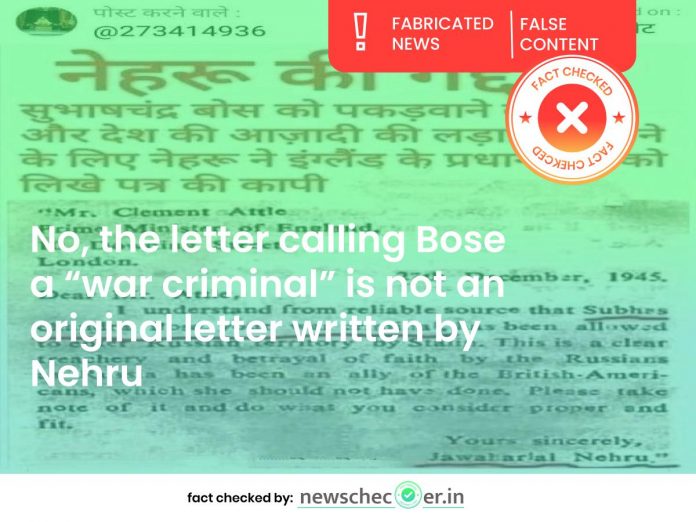 A letter allegedly written by Jawaharlal Nehru to Attlee, former PM of the United Kingdom, calling Subhas Chandra Bose a “war criminal” has been circulating on social media platforms for the last few years. Apparently written on 27 December 1945 the letter reads:

“Dear Mr. Attle, I understand from reliable source that Subhas chandra Bose, your war criminal, has been allowed to enter Russian territory by Stalin. This is a clear treachery and betrayal of faith by the Russians as Russia has been an ally of the British-Americans, which she should not have done. Please take note of it and do what you consider proper and fit. Yours sincerely, Jawarhal Nehru.”

Once again the claim in context is being shared widely on social media platforms.

A relevant keyword search led us to an article by The Free Press Journal titled, “Did Nehru really call Netaji Bose a war criminal? Here’s the full story.” It states that PM Narendra Modi declassified 100 Government of India files related to Bose in late 2015, and among them was the letter in context.

It further adds that the letter apparently appeared in a 1998 essay by Pradip Bose, Netaji’s nephew to former PM of India Atal Bihari Vajpayee.

“According to Shyamlal Jain, who was Nehru’s stenographer, contents of the letter are his recollection of what Nehru had supposedly dictated to him in December 1945. Reportedly, Jain was deposed before the GD Khosla commission which was set up in 1970 to look into Bose’s mysterious disappearance. However, the one-man commission did not accept Jain’s testimony.”

Let’s note, Netaji Subhas Chandra Bose reportedly died from injuries incurred during a plane crash during his travel across Japan in August 1945.

A Historian’s Take On The Letter

In January 2016, India Today aired an interview with Historian Ramachandra Guha, who called this letter “a dubious claim by a witness seeking publicity before the Khosla Commision in 1970.”

Guha also tweeted about the letter calling it “completely inauthentic” in a January 2016 tweet.

The Wire too published a story on this stating “that the letter is fake and fabricated is fairly clear on several grounds – it contains gross errors of grammar and spelling, for one thing. Noted historian Ramchandra Guha clarified that it was completely inauthentic, and the recently declassified files related to Bose did not corroborate anything mentioned in it.”

The obvious grammatical errors in the letter add to its lack of credibility. This includes the spelling of former PM of the UK, Clement Attlee, which is incorrectly written as “Attle.” The first sentence is missing the vowel “a” before the word reliable. Most importantly, the letter’s conclusion does not have Nehru’s signature on it.

AltNews published a detailed fact check on the same in October, 2018.

The obvious grammatical errors, inconsistency in the letter and information available in the declassified documents, and other aforementioned research make it clear that the letter in context is not an original letter written by Nehru.