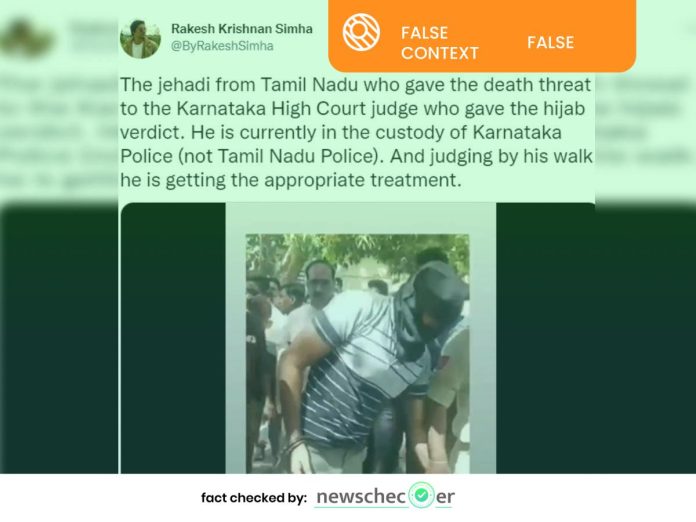 A video of a man with his face covered, and in chains, limping as he is escorted by police, is going viral on social media, claiming to show the man who gave death threats to Karnataka High Court Judges over the Hijab verdict.

The video has been shared on Twitter by user @ByRakeshSimha who has 32,800 followers on the platform. The video has garnered around 94,400 views with 7,449 likes and 2,090 retweets along with the caption ‘The jehadi from Tamil Nadu who gave the death threat to the Karnataka High Court judge who gave the hijab verdict. He is currently in the custody of Karnataka Police (not Tamil Nadu Police). And judging by his walk, he is getting the appropriate treatment.’

The Indian Express uploaded a news report on 23rd March, 2022 according to which a man from Tamil Nadu was arrested and brought to Karnataka for issuing death threats to High Court judges over the Hijab verdict in Karnataka. The report stated that the man was Rahamathulla, a native of Madurai against whom an FIR was launched in Cubbon Park police station after a video of him threatening the three-judge bench of the court consisting of Chief Justice Ritu Raj Awasthi, Justice Krishna S Dixit and Justice J M Khazi went viral.

Newschecker conducted a Google reverse image search on the key-frames of the viral video to ascertain its authenticity and found a Facebook post which had the same video uploaded on 15th March, 2022 along with the caption ‘BIG REPORT: A reward of thousand on the head, who had been missing for years, but now caught in a smuggling case, Amjad Lala, the infamous accused, caught by the Mandsaur police, read this news.’

Upon conducting a keyword search, Newschecker found a news report by Dainik Bhaskar uploaded on 15th March, 2022 which carried the same video.

According to the report “The Naya Abadi police station of Mandsaur, Madhya Pradesh arrested Amjad Lala, the notorious accused who was absconding for the last 6 years. The accused has criminal cases like murder, ransom kidnapping and smuggling, and was absconding.”

Upon further investigation, Newschecker also found a Youtube video uploaded on 15th, March 2022 by Youtube channel of Rajdhani Tak, which is Hindi based news channel.

The video contains images similar to the viral video.

According to the video, Amjad Lala was arrested by Mandsaur Police in Madhya Pradesh. The accused had been absconding for close to 6 years with grave criminal offences ranging from drug trafficking to shooting at policemen.

According to the investigation conducted by Newschecker, the arrest of criminal Amjad Lala in Mandsaur, Madhya Pradesh is being passed off the arrest of a Tamil Nadu man who gave death threats to Karnataka High Court judges on the Hijab verdict.

Vaibhav Bhujang
Vaibhav is a part of Newschecker’s English team, where he spots and debunks all kinds of misinformation, making the rounds on the internet. A Journalism graduate from St. Xavier's College, Mumbai, he holds an M.A degree in Philosophy and an M.Phil from Delhi University.
Facebook
Twitter
WhatsApp
Linkedin
Previous articleStabbing Of ‘28-Year-Old’ In Delhi’s Naraina Shared With Misleading Claim
Next articleDid An ‘Indian’ Manager Bar A Veiled Woman From Entering Restaurant In Bahrain? No, Viral Claim Is Misleading