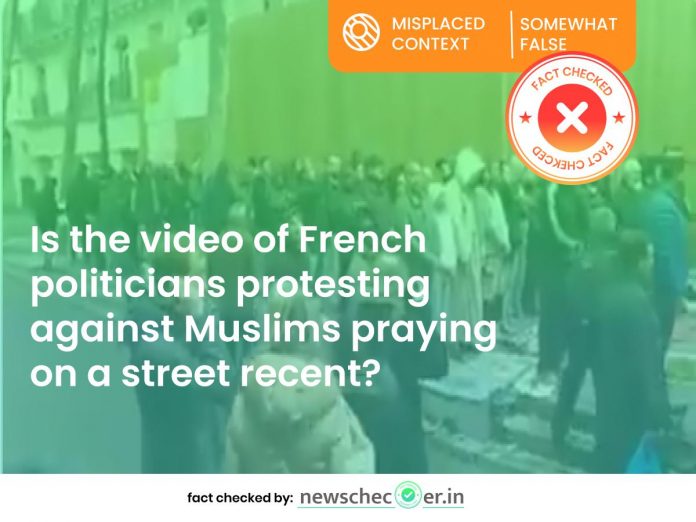 Social media users shared a video of a group of Muslims praying on a street’s sidewalk. It also shows another group of people singing loudly and holding a banner in close proximity.

Twitter user, MadhuPurnima Kishwar shared this video with the caption, “French citizens protesting against muslims taking over sidewalks & road space for Namaz…..Frenchies responded by singing the French national anthem loudly. No surprise if these “endangered”Islamists seek asylum in India & “Sabaka-Saath-Sant” enacts special law to welcome them!”

Earlier today, Tarek Fatah shared a slightly longer version of the same video with a similar caption, “In Paris, as Muslims pray on roads, blocking streets, they are met with equally loud singing of the French National Anthem by French citizens.”

This claim comes days after a French teacher was stabbed and killed in a Paris suburb, after showing his students cartoons of the Prophet Mohammad. The Guardian wrote that “a parent accused of organising a campaign against the history teacher decapitated outside his school near Paris last week exchanged text messages and phone calls with the killer, French media have reported.”

Amid racial tensions over the French teacher’s killing, two Muslim women were stabbed near the Eiffel Tower last week. Al Jazeera reported that “the women accused over the assault were drunk when they came across a group of Muslim women and children in the Champ de Mars park at the foot of the Eiffel Tower.”

“Tensions erupted Friday as French officials and residents of a Paris suburb tried to block Muslims from praying in the street—a dispute that reflects nationwide problems with mosque shortages,” the article read.

It further states, “while Islam has long been France’s No. 2 religion, the country has a chronic shortage of mosques for its estimated 5 million Muslims. Muslims in several towns have resorted to praying in the streets, fueling the anti-immigrant sentiment of far-right National Front leader Marine Le Pen.”

In November 2017, the BBC reported on the same stating, “The politicians, wearing tricolour sashes of office and singing the national anthem, disrupted about 200 worshippers on a street in Clichy.”

In the image (right) below Clichy la Garenne’s mayor Remi Muzueau and President of the Regional Council of the Ile-de-France region Valerie Pecresse are seen demonstrating against Muslims praying on the street with a banner that reads (translated), “Stop Illegal Street Prayers.”

In 2017, Ruptly published a video on their Youtube channel with the caption, “France: Violence erupts as protesters try to stop Muslims praying outdoors.”

The video of Muslims praying on a street’s sidewalk, while politicians and other demonstrators sing the French national anthem is from 2017. Twitter users Kishwar and Fatah shared this video giving the impression of it being a recent incident, amid heightened racial tensions after the killing of a French teacher in Paris suburbs.