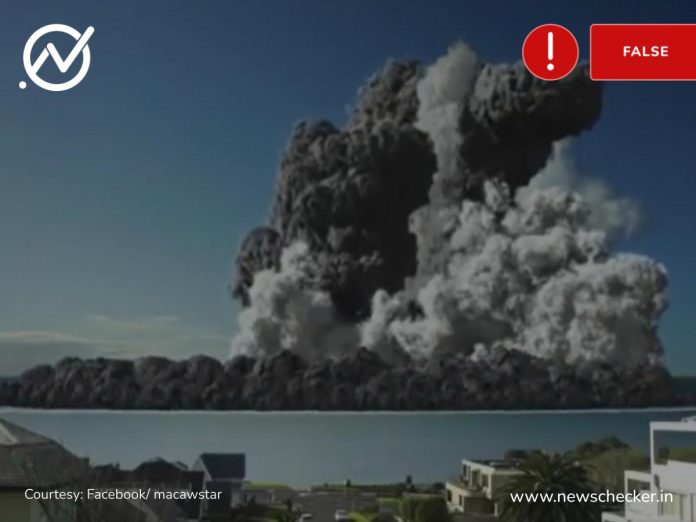 Visuals of an underwater volcanic eruption in Sumatra, Indonesia.

We conducted Google reverse image search on the keyframes of the viral video, which led us to a report by Newshub, dated October 11, 2017, titled ‘Watch Auckland get wiped out by undersea volcanic eruption.’ Displaying the viral clip, the report stated, “A video created for the Auckland Museum shows the devastation an undersea volcano eruption would bring to the city.”

It further stated the video’s creator as saying,”This projected sequence was designed to simulate a window view in a purpose-built set of an Auckland lounge room.”

A report by Mirror, dated October 11, 2017, also carried a clipped version of the widely circulated footage, and elaborated that the visualisation was created as part of research undertaken by volcanologist Professor Colin Wilson into the threat posed to New Zealand by a supervolcano eruption.

Following this, we looked up keywords “Auckland,” “Volcanic Eruption,” & “simulation” On YouTube, and found that the video was uploaded on the channel of Auckland War Memorial Museum on  December 19, 2019 with the caption, ‘Auckland Museum Volcano Simulation – Auckland Museum.’

The video has been uploaded on multiple YouTube channels to show a simulation of underwater volcanic eruption. Check such videos here, here and here.

We could thus conclude that a simulation video is being falsely passed off as visuals of underwater volcanic eruption Sumatra, Indonesia.