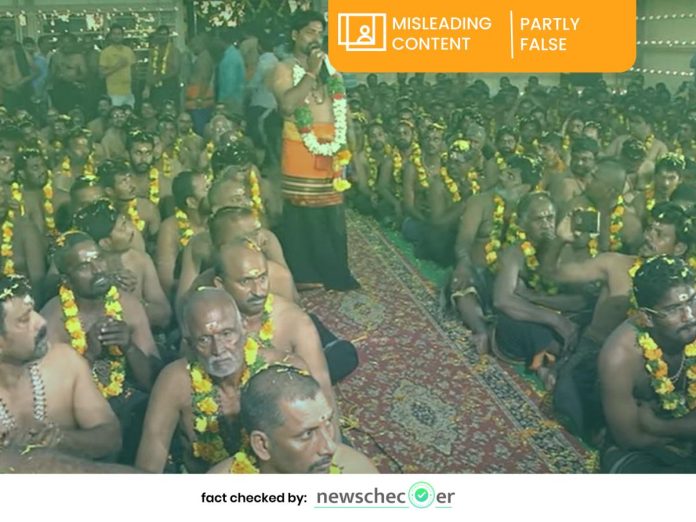 While the Sabarimala season progresses, misinformation concerning the deity and the practices associated with the temple continue. A WhatsApp video that claims to show a group of Ayyappa devotees singing praise to Allah , in a ‘temple in Kerala’, has gone viral on the messenger platform. The video alleges that as a consequence of Communist government’s policies in Kerala, that allow Muslims and Christians without knowledge of Vedas to become priests in Hindu Temples, praises are being sung to Islamic Gods in a temple premises in ‘Yedurappa’. Newschecker has found that the viral video makes misleading claims.

The video shows a man in black attire, typically donned by Ayyappa devotees, who worship the presiding deity of Kerala’s famous hill shrine  Sabarimala, leading a large group of people, singing “La Ilaha Illallah, Vavar Swamy Mohammed Allah”. As the music fades, a narration begins in Hindi claims that the video showed Hindu devotees singing Islamic hymns inside the ‘Yedurappa’ temple in Kerala. The video further blames the Communist government in Kerala that has allowed Christian and Muslim individuals to become priests without any formal training in Vedas and rituals. It also refers to another alleged incident, where a priest was photographed drinking beer.  The post further questions the ‘khilwad’ or interference with Hindu temples and blames Congress for this.

The viral forward comes in the wake of many similar posts and social media conversations asking governments in various states to free temples from government control. The supporters of the ‘Free Temple movement’ allege that donations and other assets belonging to the temple are misused by the state and do not end up being used for the welfare of the temple.

Also read: No, Sabarimala’s Aravana Payasam Tender Not Given To UAE Based Firm, Viral Forward Is Misleading

To verify the authenticity of the video, Newschecker began by conducting a keyword search of the words ‘Sabarimala’ and ‘Allah Song’ on YouTube to find several videos.  We found the same video posted by a user ‘SBR news1’ in 2019. The caption of the video read “La ilaha illallah ayyappa swamula songs’.

The full song lasts over 5 minutes and the singer can be heard singing ‘La ilaha illallah, Vavar  Mohammad Rasool Allah’. The singer can be further heard singing “it is the month of Kartika (when the devotees start penance ahead of their visit to Sabarimala). We have worn the rosary (the symbol of the devotees). Show mercy on us!” The singer is heard making multiple references to Vavar Swamy while the Ayyappa devotees join in.

According to the Sabarimala website, “Vavar (pronounced Vaa-var), also known as Vavaruswami was a Muslim saint who became a devotee of Lord Ayyappa. There is a shrine dedicated to Vavaruswami at Sabarimala, as well as Vavaruswami’s mosque at Erumeli next to Erumeli Sastha temple. The devotion of Vavaruswami to Ayyappan and the significance that the mosque at Erumeli has during the Sabarimala pilgrim season highlights the communal harmony in Kerala.” The devotion of Vavaruswami also highlights that Ayyappa devotees come from all faiths and are treated equally, whether they are Muslims, Hindus or Christians.

Songs on Vavar Swamy not new

On looking up the keywords ‘La Ilaha Illallah Ayyappa songs’ on YouTube, Newschecker further found several other songs on Vavar swamy, by several Telugu artists over the years and bhajans with the Islamic chants are sung by Ayyappa devotees during their period of austerity and during the trek to the hill shrine.

One of the videos that came up on the search results was titled ‘chalasani gardens ayyapaswami padi puja HD’ on November 2017. Padi pooja is a ceremony conducted before the Ayyappa devotees embark on the journey to visit Sabarimala. On further researching ‘Chalasani Gardens’ on Google, Newshecker found that it was a function/banquet hall in Andhra Pradesh’s Eluru, the district headquarters of West Godavari district. Further probe also revealed that there is no temple called ‘Yedurappa’ temple in Kerala.

Newschecker’s research found that the venue seen in the viral video and the images of Chalasani Gardens match.

Hence, the claim in the video that the songs were being sung by Ayyappa devotees in a Hindu temple in Kerala is not true. The incident takes place in a convention hall in Andhra Pradesh.

The video also refers to an alleged incident where ‘a Christian priest was drinking beer and urinating on the statue of God’. Newschecker had already debunked this claim last year, and the fact check can be read here.

The video of a man leading Ayyappa devotees to sing in praise of Vavar Swamy at a ‘padi pooja’ ceremony in Andhra Pradesh has been falsely shared with communal claims as that of Kerala.

Pankaj Menon
Pankaj Menon is a fact-checker based out of Delhi who enjoys ‘digital sleuthing’ and calling out misinformation. He has completed his MA in International Relations from Madras University and has worked with organisations like NDTV, Times Now and Deccan Chronicle online in the past.
Facebook
Twitter
WhatsApp
Linkedin
Previous articleDo Masks Kill? Is COVID An Ordinary Flu That Doesn’t Need Social Distancing Or Vaccines? Delhi Doctor’s Misleading Claims On COVID Resurfaces
Next articleDid Palestinian Group Hamas Land On The Moon? Movie Poster Shared To Make False Claim