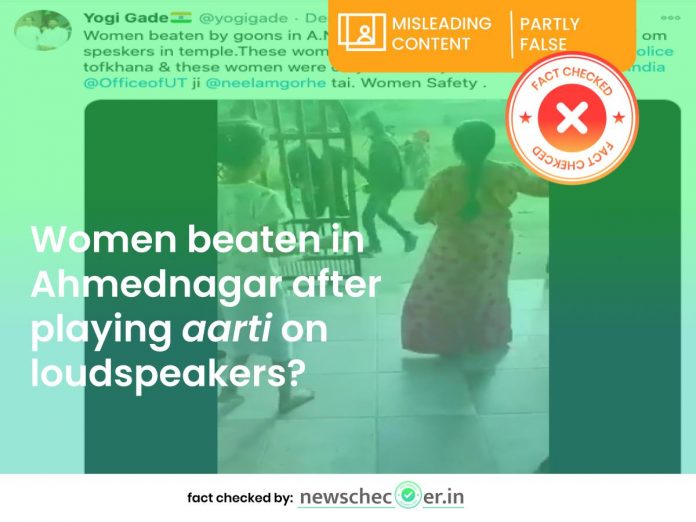 A video is being shared on Twitter with a claim that women were beaten by goons in Ahmednagar, Maharashtra for playing aarti on loudspeakers. The claim hints at a religious and communal angle for the fight. And the clip shows men armed with sticks beating women outside a house.

Taking cue from the claim’s caption we found that Surya nagar is a locality in Ahmednagar’s district in Maharashtra. We called the local police at Tofkhana police station and were directed to the Assistant Police Inspector (API), Kiran Vitthal Surse, who dismissed any communal angle related to the video.

“On the evening of 25 November, two women in the locality had a quarrel where one hit the other, but it was soon resolved. Men seen with sticks in the video are from the Inamdar family whose son thought his mother was beaten and hence came to fight with his friends,” explained API Surse.

He added that the “video is from next morning around 7.30am outside their house. No aarti takes place around that time. And the temple is around 500 metres from there.

“There have since been arrests and Section 354 of the Indian Penal Code has been included. The situation is fine now, and there is no communal angle to this,” confirmed API Surse.

The video shot has been falsely claimed saying that a fight occurred after an aarti was played.

On 2 December, Ahmednagar Police clarified that there is no religious angle to the incident shown in the video. Their tweet reads, “This is family dispute between neighboring families over disposal of garbage. There is no religious angle to this incident. Already necessary legal action taken. Please don’t spread and forward such rumor messages creating disharmony. If found so necessary legal action will be taken.”

The video being shared with a claim that women were beaten by goons in Maharashtra’s Ahmednagar for playing aarti on loudspeakers is misleading. A neighbourly dispute is taken out of context by social media users.