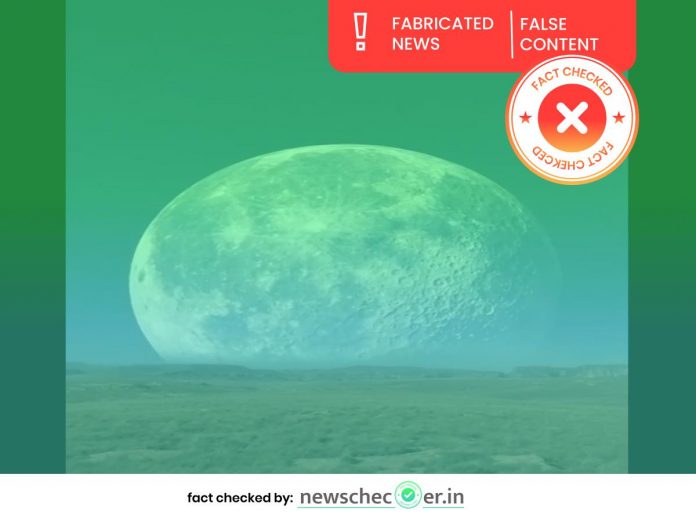 Videos of a gigantic moon blocking the sun and then disappearing have been widely circulated on social media in the past week.

“In between Russia and Canada in Arctic..moon becomes big and disappear in 30 secs and blocking sun for 5 mins,” reads a user’s claim shared with the big moon video.

Another Twitter user’s caption reads, “Coolest thing you will ever see.Imagine sitting in this place during the day (in between Russia and Canada in Artic) when the moon appears in this big size for 30 seconds and after blocking the sun for 5 seconds, disappears. Amazing”

Several other users have shared this claim with the video in the past week on Twitter.

Between 25-27 May (spanning an international date line), parts of the Earth witnessed two celestial events—a supermoon and a total lunar eclipse. “A supermoon occurs when a full or new moon coincides with the moon’s closest approach to the Earth. The moon’s orbit around Earth is not perfectly circular. This means the moon’s distance from Earth varies as it goes around the planet,” explains Mint.

A total lunar eclipse takes place when the Earth comes between the sun and the moon, blocks the sun’s rays from directly reaching the satellite, reads an Indian Express article on the 26 May super blood moon.

Twitter account HoaxEye found that the video in the claim was created by artist Aleksey___nx, who uploaded the same on TikTok.

We found that this CGI moon video was posted by Aleksey on Tik Tok on 17 May.

Aleksey’s Tik Tok posts show that other such videos have also been created and uploaded.

Actual images of the celestial events from last week can be viewed here.

Also Read: Image Of Crocodile With Title “India’s PM cried” Was Not Published By The New York Times

Social media posts claiming a video of a gigantic moon blocking the sun and then disappearing in 30 seconds was shot between Russia and Canada in the Arctic are false. The video was created by a CGI artist.

Facebook
Twitter
WhatsApp
Linkedin
Previous articleWeekly Wrap: A Look At The Different COVID-19 & Israel-Palestine Related Claims Viral In India
Next articleViral Photograph Of Sonia Gandhi With Book “How To Convert India Into Christian Nation” Is Edited