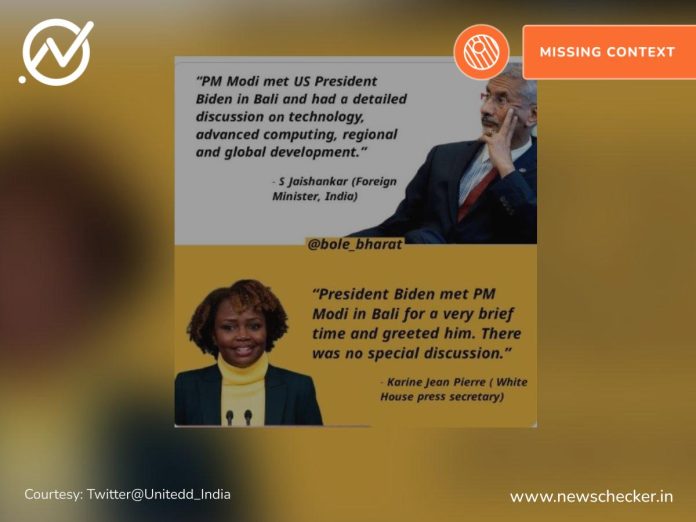 A graphic, presenting seemingly different accounts of the recent Modi-Biden meet in Bali, is going viral on social media insinuating that the Indian MEA exaggerated a small ‘greeting’ between the two leaders.

The viral graphic doing the rounds on social media shows varying accounts of the meeting that occurred on the sidelines of the recent G20 summit. It carries the images of EAM S Jaishankar and White House Press secretary Karine Jean-Pierre, juxtaposed with contradicting accounts of what transpired during the meet. This prompted varied reactions on social media, mostly mocking the “hype” by the Indian side.

Newschecker began by running a keyword search for “Modi Biden G20 meet”, which led us to this statement by India’s Ministry of External Affairs. According to the MEA’s press release, dated November 15, the two leaders (Modi and Biden) also discussed “topical global and regional developments” in the meeting.

“Prime Minister Narendra Modi met President of USA, Joseph R Biden on the margins of G-20 Leaders’ Summit in Bali today,” the MEA said. “They reviewed the continuing deepening of the India – US strategic partnership including cooperation in future oriented sectors like critical and emerging technologies, advanced computing, artificial intelligence, etc,” the statement read. The same was reported by several media outlets.

This confirmed that the viral quote attributed to the EAM was actually from a statement put out by India’s Ministry of External Affairs on November 15.

On probing further, we found another press note released by the White House on the same date, November 15, 2022.

The press note detailed that President Biden met PM Modi and President Widodo of Indonesia on the margins of the G20 Leaders’ Summit in Bali to reaffirm their shared commitment to the G20 as the premier forum for international economic cooperation.

“Facing significant global challenges, the leaders discussed how the G20 continues to demonstrate its collective capacity to bring together major economies to advance sustainable and inclusive growth in our economies and beyond, tackle the ongoing climate, energy, and food crises, strengthen global health architecture and promote technological transformation,” the release stated.

Did White House Say There Was No Special Discussion During Modi-Biden Meet?

On further probing the source of Jean-Pierre’s quote, we were led to this transcript released by the White House, dated November 21, when press secretary Jean-Pierre spoke to journalists on Air Force One on an unrelated subject.

Jean-Pierre was answering a question on an Ambassador being appointed to India, when she referred to the ties between the two countries as an ‘important relationship’.

“You saw the President greet and meet very briefly with Prime Minister Modi just last week when he was in Bali,” Jean-Pierre says. This statement by Jean-Pierre has been paraphrased in the viral graphic. Furthermore, Jean-Pierre does not say that there was no special discussion. This particular line has been falsely attributed to Jean-Pierre, making it appear as a contradiction to India’s account of the Modi-Biden meet.

A remark made by White House Press Secretary Karine Jean-Pierre in a different context, has been paraphrased and tampered with, and falsely shown as a counter to India’s account of the recent Modi-Biden meet on the sidelines of the G20 summit in Bali.

Demonetisation By The US? Here’s A Fact-Check Of Viral Whatsapp Forward