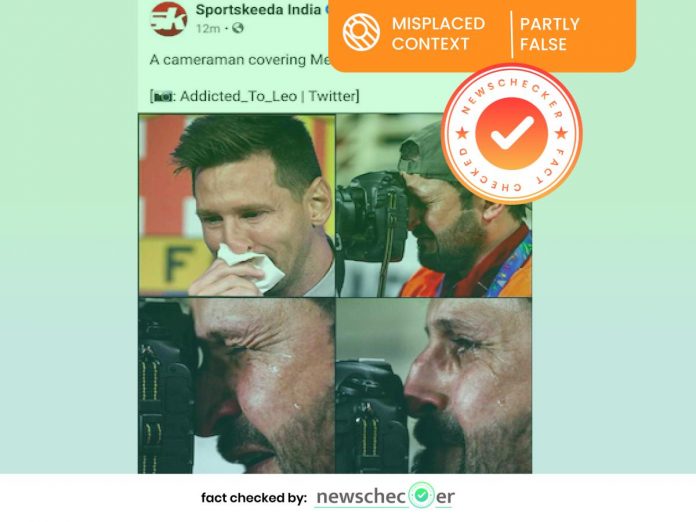 Hours after footballer Lionel Messi’s tearful farewell to Barcelona, social media posts with a collage of Messi along with a teary photographer have gone viral.

One user tweeted this image with the caption, “Even the cameraman covering Messi’s farewell from Barcelona cried like a baby..Sigh.”

Another user tweeted the same image with the caption, “Pic of the day: Barcelona cameraman covering Messi farewell.”

This claim has been shared by many users on Twitter and Facebook. Between 8 and 9 August 2021, Facebook posts with the viral image and keywords “cameraman messi farewell” garnered over 15,000 interactions, as per Crowdtangle data.

This claim goes viral after Argentine footballer Lionel Messi confirmed his departure from Barcelona at a news conference. A video report by BBC News shows Messi moved to tears by a standing ovation at the conference.

“Messi is ending his 21-year association with the club, who cannot afford to honour the new contract they agreed with him because of La Liga’s salary limit,” reported BBC News.

A photograph of Messi from this conference has gone viral as part of the collage with the photographer.

A reverse image search of the viral image in context led us to a Twitter post by AFC Asia Cup in January 2019. The post includes the photographer’s image from the viral collage with a caption that reads, “Passionate. Emotional moment for an Iraqi photographer during the Round of 16 clash against 🇶🇦 ! #AsianCup2019”

AFC Asia Cup shared the Iraqi photographer’s image on their official Facebook page in 2019 as well.

With a relevant keyword search, we found AlJazeera’s Arabic report naming the man in the image as Iraqi Football Association photographer, Muhammad al-Azzawi.

On 30 January 2019, a Twitter user shared another image of photographer Azzawi feeling emotional when Iraq lost to Qatar in the Asia Cup football match. The image shows an Iraqi flag on his jersey.

Teary images of photographer Azzawi were previously viral with misleading contexts related to MS Dhoni during the 2019 World Cup semi-final match between New Zealand and India as well as the Israel-Palestine conflict.

Viral images of a teary cameraman are being shared with a misleading context related to Messi’s farewell. The man in the image is Iraqi photographer Muhammad al-Azzawi who got emotional after Iraq lost to Qatar in an AFC Asia Cup match in 2019.